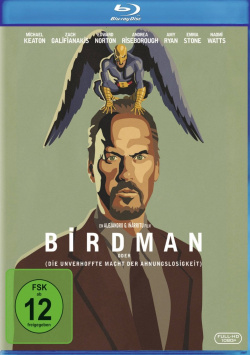 Birdman (or The unexpected power of ignorance) - Blu-ray

Film: Riggan Thomson (Michael Keaton) has a dream: with an ambitious play on Broadway he wants to revive his career and finally experience the appreciation as an artist he has been denied until now. Because he could celebrate big commercial successes as a leading actor in the movies and the superhero "Birdman" in former times. But he didn't get any real recognition for his acting achievements. That's about to change. But shortly before the premiere of the piece everything that can go wrong seems to go wrong. The financial means are exhausted and one of the actors is seriously injured during the rehearsals. We need an adequate replacement. Leading actress Lesley (Naomi Watts) and his producer Jake (Zach Galifianakis) persuade Riggan to hire the extremely popular but also very eccentric Mike Shiner (Edward Norton). Mike's unpredictable behavior doesn't make preparations for the premiere any easier. But Riggan doesn't let himself be deterred so easily from proving himself in front of his audience, his critics, his friends, his family and above all in front of himself...

With "Birdman" the Mexican director Alejandro G. Iñárritu has staged a fascinating glimpse behind the scenes of Broadway that is difficult to categorize. The film is satire, drama, slapstick and romance in equal measure - and yet somehow also nothing of all that. With a very special style of staging, Iñárritu manages to create something entirely his own that defies any clear categorization. This effect is primarily achieved by the great camera work, which was rightly awarded an Oscar. Because through skillful pans, crazy camera movements and unrecognizable cuts the feeling arises that this film consists of a single long shot. The realization of temporal and spatial leaps alone is so fascinating that you simply have to see it for yourself.

Beyond the visual level that makes "Birdman" truly unique, the film also thrives on a great cast. Whether Zach Galifianakis ("Hangover"), Emma Stone, Naomi Watts or Amy Ryan - they all deliver top performances here, no matter how big or small their roles are. But the real stars of the film are without a doubt Edward Norton and Michael Keaton. Keaton, who seems predestined for this role due to his "Batman" past and the subsequent career break, probably delivers the best and most significant performance of his career. And even though he repeatedly claims in interviews that he has nothing in common with Riggan in his private life, you really get the feeling that he lives this role. He plays the fallen Hollywood star in search of artistic integrity and recognition with such fervour that as a spectator you can't help but be captivated by it. But Edward Norton is also incredibly good as an actor with too much ego and a good portion of self-irony, which leads to some of the funniest moments of the movie.

Although "Birdman" deservedly could be called a masterpiece because of the script, the visual style and the actors, it has to be said that it's not a movie for the masses. The purely dialogue-driven events, the somewhat exhausting soundtrack and the story's subject matter probably appeal to far less viewers than one of Riggan's early (fictive) "Birdman" movies would have managed to. The look behind the scenes of a Broadway production, in which oversized egos, injured vanities and empty cash registers determine everyday life, is not necessarily the stuff of which the big blockbusters are made. Thus, one should definitely have a penchant for artistic acting cinema in order to enjoy this film in all its glory. But if you get involved with it, you will undoubtedly get one of the best movies of the year (as long as this can be said already in January). A great example that creativity, originality and great acting can be extremely entertaining, humorous and surprising. But there is a very clear one: Absolutely worth seeing!!!!

Picture + Sound: The Blu-ray image is pin sharp and shows hardly noticeable quality losses even in the darker scenes. The color scheme is pleasantly warm and slightly artificial, which well underlines the very special atmosphere of the film. The sound is present in an atmospheric DTS-HD Master Audio Mix, which remains largely unobtrusive, but which also provides audible movement in the multi-channel area through targeted sound effects and ambient noises - such as in the Times Square scene. Gut!

Extras: Besides a picture gallery the Blu-ray has a very interesting conversation with main actor Michael Keaton and director Alejandro G. Iñárritu (approx. 14 min.), as well as an absolutely worth seeing view behind the scenes (approx. 33:23 min.). Gut!

Fazit: The four-time Oscar winner "Birdman" is a great example that creativity, originality and great acting can also be extremely entertaining, humorous and surprising. The long overdue comeback for Michael Keaton offers an amusing, yet profound look behind the scenes of a Broadway production in which oversized egos, injured vanities and empty coffers determine everyday life. A great film, which is presented on the Blu-ray in very good picture and sound quality. The offered bonus material is clear, but very worth seeing. The bottom line is clear: Absolutely recommendable!