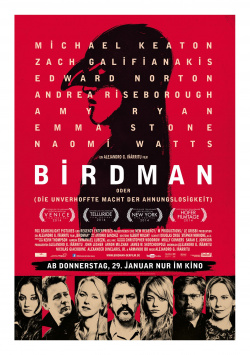 Birdman (or The Unexpected Power of Cluelessness)

Riggan Thomson (Michael Keaton) has a dream: with an ambitious play, he wants to revive his career on Broadway and finally experience the appreciation as an artist that has so far eluded him. For it is true that he was previously able to celebrate great commercial success as a leading actor in the films and the superheroes Birdman. But he has not received any real recognition for his acting achievements. That is about to change. But just before the play's premiere, everything that can go wrong seems to go wrong. The financial resources are exhausted and one of the actors is seriously injured during rehearsals. Adequate replacements must be found. Riggan is persuaded by leading lady Lesley (Naomi Watts) and his producer Jake (Zach Galifianakis) to hire the extremely popular but also very eccentric Mike Shiner (Edward Norton). Mike's erratic behavior doesn't make the preparations for the premiere any easier. But Riggan is not so easily dissuaded from proving himself to his audience, critics, friends, family, and most importantly, himself.

With Birdman, Mexican director Alejandro G. I&ntilde;&aacute;rritu has directed a fascinating behind-the-scenes look at Broadway that is difficult to put into one category. The film is equal parts satire, drama, slapstick and romance - and yet somehow also none of the above. With a very particular staging style, I&ntilde;&aacute;rritu manages to create something all its own that defies any clear categorization. This effect is achieved primarily through the superb camerawork, which definitely deserved an Oscar. Through clever panning shots, crazy tracking shots and unrecognizable cuts, it feels as if this film consists of one long take. The implementation of temporal and spatial jumps alone is so mesmerizingly realized that you simply have to see it for yourself.

Besides the visuals that make Birdman truly unique, the film also thrives on a great ensemble of actors. Both Zach Galifianakis (Hangover), Emma Stone, Naomi Watts or Amy Ryan - they all deliver best performances here, no matter how big or small their roles are. But the real stars of the film are undoubtedly Edward Norton and Michael Keaton. Keaton, whose Batman past and subsequent career setback seems to have made him just about predestined for this role, delivers probably the best and most significant performance of his career here. And even though he repeatedly claims in interviews to have nothing in common with Riggan in his personal life, you really get the feeling that he lives this role. He plays the fallen Hollywood star in search of artistic integrity and recognition with such fervor that as a viewer you can't help but be captivated by it. But Edward Norton is also incredibly good as an actor equipped with a bit too big an ego, and with a fair amount of self-deprecation that leads to some of the film's funniest moments.

Although Birdman could deservedly be called a masterpiece due to its script, visual style, and actors, it must also be said that it is not a film for the masses. The purely dialogue-driven action, the somewhat exhausting soundtrack and the subject matter of the story are likely to appeal to far fewer viewers than any of Riggan's early (fictional) Birdman films would have managed. The behind-the-scenes look at a Broadway production, where outsized egos, wounded vanities and empty coffers rule the day-to-day, isn't exactly the stuff of which the very big blockbusters are made. So you should definitely have a soft spot for artful acting cinema to enjoy this film in all its glory. But if you go for it, you'll undoubtedly be treated to one of the best films of the year (if that can be said in January). A great example that creativity, originality and great acting can also be extremely entertaining, humorous and surprising. For this there is a very clear: Absolutely worth seeing!!!!

Cinema trailer for the movie "Birdman (or The Unexpected Power of Cluelessness) (USA 2014)"
Loading the player ...