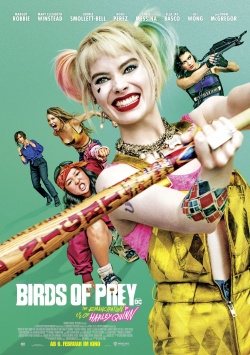 Birds of Prey: The Emancipation of Harley Quinn

Life is so unfair! As the Joker's girlfriend, Harley Quinn (Margot Robbie) could get away with anything in Gotham. No one dared mess with her. But now, with the relationship on the rocks, Harley is fair game. Not only is the former moll being hunted by cop Renee Montoya (Rosie Perez). Gotham's most vicious, narcissistic criminal Roman Sionis (Ewan McGregor) also has it in for Harley. And not just her: Young pickpocket Cass (Ella Jay Basco) is also on the gangster's hit list after she steals a very special diamond from his right-hand man Zsasz (Chris Messina) that would give Sionis even more power in the city. For better or worse, Harley and Montoya must team up to rescue Cass and take down Sionis, along with the mysterious avenger Huntress (Mary Elizabeth Winstead) and the literally voice-acting Black Canary (Jurnee Smollett-Bell). The Birds of Prey are born.

No question: the best thing about Suicide Squad was Margot Robbie as Harley Quinn. The scenes she appeared in had extremely high entertainment value. If you hung out at any of the various ComicCons after the movie, you discovered Harley Quinn cosplayers in particular - in addition to various Deadpools. This character has a real cult character, especially because of Robbie's game. So the news that harley Quinn would get her own movie was all the more gratifying. And the first trailer of Birds of Prey: The Emancipation of Harley Quinn then promised fun women power of the slightly weirder kind.

This promise can not quite keep the finished film. It's entertaining, no question about it. It's fun, that's undeniable. But it also falls far short of its potential by trying too hard to be flashy, cool and non-conformist. But that's exactly why, in most moments, it just isn't. You can tell Margot Robbie is having a lot of fun with this role. But unfortunately, she turns it up too much in some moments, which easily turns the character into a caricature. As a result, the few, but definitely present moments of some seriousness just don't work. Furthermore, the other characters besides her come up a bit short. Although especially the other Birds of Prey and their past are introduced briefly, these characters have to take a back seat again and again. Especially with Huntress and Black Canary, this is a real shame. When the ladies fight side by side in the final act, you feel what this movie could and should have been all along.

Ewan McGregor is good as the self-absorbed villain, but like Harley Quinn herself, he's also a bit too put upon. He has a couple of very amusing scenes, but again, the feeling remains that more could have been made of the character. That's really the fundamental problem with a film that too often goes with the handbrake on, and in the moments when it lets it go, reveals what potential is left untapped here. A bit too flashy and colorful, unnecessarily convoluted storytelling with constant time jumps, but all in all still entertaining fun that makes you want to get to know the other members of the Birds of Prey even better. If you liked Suicide Squad, you shouldn't miss Birds of Prey: The Emancipation of Harley Quinn despite some minor flaws. Because the criticisms are easily made up for by well-directed action, some delightfully black-humored moments, a good soundtrack and the well-performing lead actresses. Absolutely worth seeing!

Cinema trailer for the movie "Birds of Prey: The Emancipation of Harley Quinn (USA 2019)"
Loading the player ...