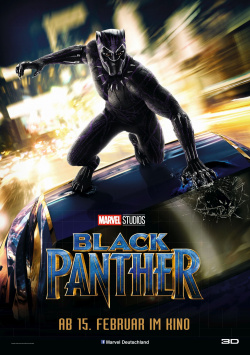 After his father is killed in an attack and he first clashes with the Avengers as Black Panther, T&acute;Challa (Chadwick Boseman) returns to his homeland, the African kingdom of Wakanda, to take his father's place as king. But the high-tech country, which has long existed in isolation from the rest of the world, has been targeted by powerful enemies who are after the mysterious power that makes Wakanda so special and the country's technology so powerful. T`Challa, as the Black Panther, must now do everything he can to keep the peace in the land. But he has no idea how closely connected he is to the real enemy, and that it is not just the fate of Wakanda that is at stake.

With Black Panther, the next MARVEL superhero takes the stage. Having already been impressively introduced in The First Avenger: Civil War, T`Challa now gets to step up to the plate with his first solo adventure. MARVEL delivers thereby usual good work. But a revolution, as many critics especially in the U.S. cheer, the film is now really not. No question: The fantasy adventure is very entertaining for long stretches and Chadwick Boseman proves again that he is the perfect choice for this mystical superhero. In addition, the film scores with some very strong female roles that can leave a lasting impression in a pleasantly unobtrusive way.

Visually, the comic book adaptation also has some great moments to offer - but also some surprising weak points. For example, some scenes set in Wakanda are all too obvious that they were shot in front of a bluescreen and that the world was created on a computer after the fact. You're used to better things from MARVEL. That brings and now to the story: This offers only old familiar in a new guise. The pace is sometimes surprisingly slow for a superhero movie, which at least gives the impression of dramaturgical depth. But on closer inspection, there really isn`t anything new being told here. The motives of T`Challa's antagonist are not entirely dissimilar to those of Daniel Brühl's character in The First Avenger: Civil War, and the conflicts Black Panther faces in his homeland don't exactly reinvent the genre either (I'm deliberately staying a little vague here to give away as little as possible!).

But the biggest problem with the film is that it takes itself a little too seriously in places. Moreover, the moral message of the story isn't exactly served up subtly, but is smacked around the audience's ears like Thor's hammer. As a result, the entertainment value is noticeably pushed down in some scenes, which even the detail-oriented set can't make up for. Black Panther is miles away from being a bad movie. Still, it fails to generate quite the buzz. Given the potential that lies not only in the template, but also in director Ryan Coogler and his actors, and of which in the end far too little is felt in the film, now really can not be called a genre revolutionizing masterpiece.

Actors great, story okay, effects nice, but not stunning = entertaining popcorn entertainment with some wow, but also quite a few yawn moments. But all in all still a more than decent: Worth seeing!