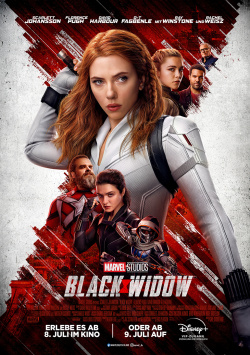 When we last saw Natasha Romanoff aka Black Widow, she was sacrificing herself fighting Thanos. That really seemed to be the end of her story in the Marvel Universe. But now there is a reunion after all, recounting the events between "Captain America: Civil War" and "Avengers: Infinity War". After Natasha is wanted around the world, she must go into hiding. In the process, she meets Yelena (Florence Pugh), with whom she had once lived as a fake family along with Russian agents Alexei Shostakov (David Harbour) and Melina Vostokoff (Rachel Weisz) before being trained in the Red Room program to "Widow". Together, they decide to destroy the Red Room and kill General Dreykov (Ray Winstone), the program's string-puller. But to do so, they need help from their foster parents Alexei and Melina...

"Black Widow" is a good Marvel movie and a very good action movie with a little Bond flair. There's no question that Scarlett Johansson finally got the solo movie here that she deserved for a long time. And therein lies the problem: the film is just too late. It would have worked better if it had actually come out at the time it's set in - which is to say, sometime after "Captain America: Civil War". The sacrifice Natasha made in "Endgame" was a painful but still dignified farewell to the character for fans. Now to learn once again about earlier events, as well as her past, leaves you kind of cold - as entertaining as the whole thing may be.

The movie works very well whenever the action is at the forefront. There are some fight sequences and car chases that are really great staged. Especially on the big screen they can unfold their full power. But when it comes to the interpersonal stuff, director Cate Shortland ("Lore") only manages to hit the right note to a limited extent. Some characters are too overdrawn, as they are given little opportunity to develop. Alexei Shostakov, for instance, something like the chavvy Russian equivalent of Captain America, is an interesting character who often degenerates into a joke here. And the banter between Natasha and Yelena could have used a little more wit - even if the discussions about Black Widow's fighting position are quite amusing.

As a big fan of the MCU, I had fun with "Black Widow". Great fun, in fact. But especially compared to other films in the franchise, I didn't immediately want a sequel here or have a desire to see the film again as soon as possible. However, that's probably less due to the film itself and more due to the fact that I - like probably many other fans - was done with the story and didn't really need this step back in the timeline of the MCU. Only the obligatory after-credits scene could lead to this film also having interesting - and perhaps very tragic - implications for the future of the MCU (whether in theaters or planned series). All in all, not quite the big bang, but definitely extremely entertaining popcorn cinema with some great visuals. And for that, the bottom line is a clear: Absolutely worth seeing!

"Black Widow" runs in the cinema is bookable on Disney+ via VIP access for 21,99 €