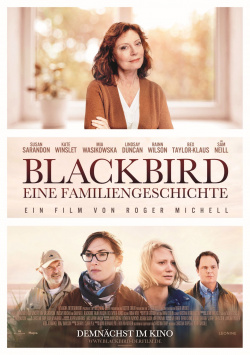 Lily (Susan Sarandon) and her husband Paul (Sam Neill) have invited their family to spend a weekend together. But eldest daughter Jennifer (Kate Winslet), her husband Michael (Rainn Wilson), her sister Anna (Mia Wasikowska) and her sister's friend Chris (Bex Taylor-Klaus) don't show up, nor does Esther's best friend Liz (Lindsay Duncan), for a fun-filled family gathering at the picturesque seaside home. They've all come to say goodbye to Lily. For she is terminally ill and has decided to end her life before she fully loses control of her body and dies miserably. On the surface it seems that the daughters have accepted their mother's decision, but over the course of the weekend it is revealed more and more clearly how poorly they can actually cope with Lily's desire to die in a self-determined manner. Anna even plans to prevent her mother's death at the last moment after all.

"Blackbird" is a remake of the Danish drama "Silent Heart - My Life Belongs to Me", which Bille had released in cinemas in August 2014. "Notting Hill"-director Roger Mitchell has transferred the story in large parts 1:1 - which may also be due to the fact that the script was written by Christian Trope, as in the original. For the American-British co-production, the whole thing was changed in a few aspects - for example, to bring in a little more diversity. Apart from that it's actually the same movie, just with different actors. But this is where the remake really scores.

Because not only is Susan Sarandon really great as the dying head of the family. Kate Winslet also proves her versatility and strength as a character actress once again here. And Sam Niell is simply wonderful with a very understated performance. The gorgeous location and understated music also ensure that this sad story is really worth watching. So like the Danish original, this version is also a quiet, sensitive drama about dying, about self-determination but also about difficult family relationships. The latter is not always convincing and sometimes seems a bit contrived, which is especially due to the somewhat overdrawn character of the bipolar daughter Anna.

But even if there is some to criticize in this area, "Blackbird" is overall a very beautiful, but also extremely difficult and sad film that leaves its viewers rather depressed. It's hard not to be overcome by a certain sadness at the end. You should be aware of that in advance. But if you are up for it and want to experience extremely touching, stirring and beautiful drama cinema of the quiet kind and if you don't know "Silent Heart - My Life Belongs to Me" yet, you should not miss this largely successful remake. Worth seeing!