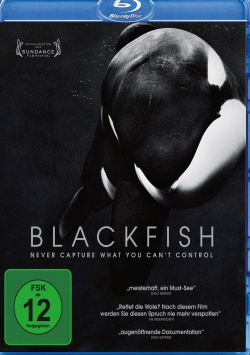 Movie:When Dawn Brancheau, experienced trainer at SeaWorld, was killed by the orca bull Tilikum during a show in February 2010, it was initially dismissed as an unfortunate accident and later by SeaWorld as the trainer's fault. But a look into the past reveals that Dawn Brancheau wasn't the first person Tilikum killed during the course of his captivity. With the help of former SeaWorld trainers, specialists and eyewitnesses to the accident, filmmaker Gabriela Cowperthwaite attempts to trace how the deaths could have occurred, how orcas are treated at major theme parks, and the effects that a life in captivity has on these animals. The result of their research is the film Blackfish, which has become insightful, shocking and very moving.

Naturally, the realization that orcas are far worse off in captivity than they are in freedom is not necessarily groundbreakingly new. The film could also be accused of being slightly manipulative at moments. But measured against the subject matter, Cowperthwaite's production proves to be very matter-of-fact. With an almost detached sobriety, she simply lets the pictures speak in many scenes - and they truly say more than a thousand words. Probably the most intense moment is footage from 2006 that shows the orca Kasatka grabbing the foot of his trainer, Ken Peters, and pulling the man underwater again and again. It was only the fact that Peters was an experienced diver and had built up a deep bond of trust with Kasatka that ultimately allowed him to remain calm in this situation, saving his life. But this scene also makes clear how unpredictable animals are in captivity.

And then to hear from former trainers about how little prerequisite animal handling is required of employees at SeaWorld is just as frightening, as is the ignoring on the part of senior management of injuries the whales inflict on each other. The opportunity to speak out on all of these allegations, giving viewers a chance to hear both sides on the issue, has been declined by SeaWorld despite several requests. This is annoying in that Blackfish can so easily be dismissed by critics as a pure anti-SeaWorld campaign. But that simply isn't true based on the filmmaker's efforts alone. Because even if it is superficially about SeaWorld and the company's treatment of the orcas, the other animals and also the employees, the film ultimately asks much more fundamental questions, with which not only animal rights activists and environmentalists should deal.

Blackfish is a stirring, extremely moving film, which does not illuminate all aspects of the issue and in some moments seems to be positioned a little too one-sided. But especially the uninitiated viewers, who don't think much about the welfare of the animals when visiting amusement parks like SeaWorld or who believe in pretty commercials that the animals are so incredibly happy here, will have their eyes opened in a very intense way. At the same time, it lays the groundwork for important discussions that should be had, and not just after watching this documentary. Absolutely worth watching!

Image + Sound: The archival footage consisting of TV clips, home video footage and other footage had some weaknesses such as blurring, smudging or drop outs. However, when it comes to the interviews and footage shot specifically for this documentary, the image is convincing with a very high overall sharpness, a coherent color scheme and a good mix of contrasts and black levels. The audio, which is only available in the original English (with German subtitles), is primarily dominated by the interviews, as is usual with documentaries, which are mixed rather frontally overall. Music and some minor surround moments ensure that here and there also some movement comes into the tonal action. Good!

Extras: As a bonus, the Blu-ray has some interesting interviews to offer. In addition to a conversation with the director (approx. min.) and Dr. Naomi Rose about the truth about wild whales (approx. 4:42 min.) and alternatives to captivity (approx. 2:41 min.), there are additional interviews with former trainers John Hargrove (approx. 5:12 min.), John Jett (approx. 2:55 min.), Dean Gomersall (approx. 2:11 min.) and Jeff Ventre (approx. 2:43 min.). in addition to these interesting additions to the main film, the bonus material also has an extensive Q&A with the director at the Sheffield Documentary Film Festival (approx. 17:53 mins). Good!

Conclusion: Blackfish is a stirring, extremely moving documentary, which can be accused of a certain one-sidedness, but which in its own way raises very important questions and denounces grievances, which should definitely be thought about and discussed more intensively even after the film. This very good and also important film presents itself on Blu-ray in good picture and sound quality and also has some bonus interviews worth watching. Absolutely recommended!