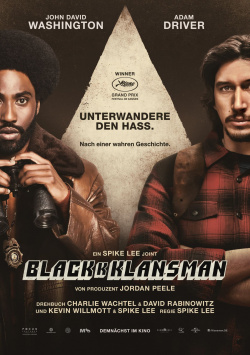 In the early 1970s, Ron Stallworth (John David Washington) becomes the first African American to be hired as a cop in the Colorado Springs Police Department. From his first day on the job, the young cop faces resentment from his white colleagues. But he refuses to let this get him down. Determined to show his superiors that he can do more than just work in the evidence room, he embarks on an insane mission to infiltrate and expose the Ku Klux Klan. In fact, he manages to make contact with a local group over the phone and get as far as the circle of confidants of Klan leader David Duke (Topher Grace). But then he needs someone to play the role he played so convincingly on the phone for him on the ground as well. Is his colleague Flip Zimmerman (Adam Driver) the right man for the job? Against all odds, can the cops take down the Ku Klux Klan?

In his latest film, BlacKkKlansman, director Spike Lee tells an incredible story that actually happened in the early 1970s. Of course Lee has taken some artistic liberties, But the core of the story is so absurd that no one could actually make it up. With a lot of 70s flair and great actors, the picture of a society in transition is shown, which threatens to break between progress and panic about the changes it will bring. This all happened over forty years ago, but is sadly more relevant than ever. This is made clear by the harrowing images Lee shows in the film's closing credits.

So BlacKkKlansman is not only entertaining for long stretches, but also thoroughly relevant. Still, Lee's production struggles with a few problems. For one, there's the fact that Lee is no fan of subtlety. And that's exactly what the film would have benefited from in some scenes, which seem a bit too doctrinaire and intrusive as they are presented here. Moreover, some characters threaten to be drawn into ridicule due to a certain amount of overacting. That in itself isn't a bad thing. But in connection with the scenes, which are told with great seriousness, the overdrawings just seem a bit incongruous.

Mal times absurd comedy, sometimes harrowing drama - that often fits, but just not always. Had Lee been a bit more subtle in both areas, perhaps a more coherent tone would have emerged. But as it is, the film lives primarily from its message, which is important enough to let us overlook the weaknesses of the staging. And therefore there is also despite some lengths and other small point deductions a clear: Worth seeing!

Cinema trailer for the movie "BlacKkKlansman (USA 2018)"
Loading the player ...