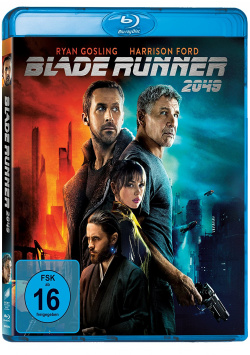 Movie: Many years have passed since the replicants rose up and the rebellion was crushed. An electromagnetic blast plunged the world into darkness back then, destroying all electronic data. But life on Earth goes on - and so does the hunt for the old replicants, who have since been replaced by a new, obedient generation. LAPD Officer K (Ryan Gosling) is a blade runner whose job it is to track down the submerged replicants and render them harmless. When he succeeds once again, he stumbles upon clues that lead him to a long-held secret that could shake the world to its foundations.

When Ridley Scott brought Blade Runner, a science fiction thriller based on a short story by cult author Philip K. Dick, to theaters in 1982, expectations were enormous: the director of Alien and the hero of Star Wars making science fiction together? That can only be great. But the flick failed at the box office, as it did with many critics. Over time, this has changed considerably. Blade Runner has long been a cult film and is one of the best and most influential works of modern science fiction cinema. A sequel has often been rumored, but never came for 35 years.

Now, with Blade Runner 2049, the story is finally being told again. Of course, with such a cult film after more than three decades, the expectations from fans are disproportionately high, making it almost impossible to even come close to meeting them. And the fact that Ridley Scott then also refrained from directing himself didn't exactly make it easier for his successor either. At least doubting voices quickly quieted a little when it was announced that Denis Villeneuve would be taking the helm. After all, the Canadian filmmaker had proven himself a master at being able to combine great entertainment with depth and ambition with outstanding works like Sicario and Arrival.

And so it's not really surprising then that his Blade Runner 2049 has become an absolutely worthy successor to the revered original. It was able to succeed because Villeneuve refrained from copying Scott's film. He has made the sequel something of his own with his own signature. While he builds on the original, he doesn't cling desperately to its look or its dramatic structure.

The story quickly seems quite predictable. Still, the film manages to never get even remotely boring. That in the end everything is quite different than it seems at the beginning will hardly surprise connoisseurs of Denis Villeneuve's films. Nevertheless, it has to be said in all honesty that his dark version of the future is neither as groundbreaking and original as the one by Ridley Scott, nor does the story have the philosophical depth of the first part. But since it doesn't even try to achieve that, this great science fiction thriller is able to fully develop its own strengths.

The look is great, as are the visual effects and sound design. But the actors all deliver very good performances as well, and of course it's especially nice for fans that Harrison Ford has stepped into the role of Rick Deckard once again. He can't quite hold a candle to Ryan Gosling, but especially in the second half, where his character changes more and more, he too proves to be an extremely good choice for the lead role in this dystopian thriller. That's all that can be said about Blade Runner 2049 then, without giving too much away about the plot. And that should be avoided at all costs. Only one thing can be revealed completely spoiler-free: Science fiction cinema is richer by another great work and Denis Villeneuve has once again confirmed his reputation as one of the best filmmakers of today. Even if the big success at the box office failed to materialize and the film loses some of its power on the small screen, there can only be one recommendation: Absolutely worth seeing!

Image + Sound: The Blu-ray's audiovisual realization is very good in all areas. The image sharpness is on a high level, the color mixing captures the atmosphere of the film very well and the matching of the contrasts as well as the pleasant image depth can convince. The 5.1 DTS-HD Master Audio mix can score points in the quieter moments as well as in the more effects-heavy, action-packed scenes with powerful bass and good surround effects. Very Good!

Extras: The Blu-ray's supplementary material is rather disappointing. There is only a look at the creation of the world of Blade Runner (approx. 21:55 min.), the three short films already released on the internet before the film (approx. 28:06 min.), and six mini-features explaining Blade Runner for beginners (approx. 11:22 min.). There certainly could have been more!

Conclusion: Blade Runner 2049 won over fans of the original and wowed critics. Despite this, it failed to be a huge success at the box office. Thus, this hotly anticipated sequel fared similarly to its predecessor, which also only became a cult film over time. Denis Villeneuve's great sci-fi film could also succeed in home cinema. The Blu-ray is technically on a very good level, whereas the bonus material is at least quantitatively a little disappointing. Overall, however, there is clearly a: Absolutely recommendable!