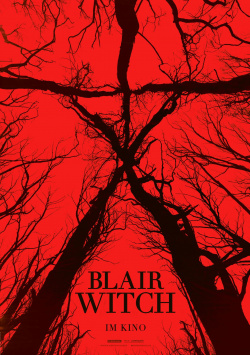 Twenty years have passed since Heather Donahue and her two friends disappeared in the Black Hills woods of Maryland. Her brother James (James Allen McCune) doesn't want to believe Heather is dead. He thinks he's found a hot lead in an internet video, which he and his friends Peter (Brandon Scott), Ashley (Corbin Reid), and Lisa (Callie Hernandez) decide to follow in the dark woods. The group is led on the trail of the Witch of Blair by the two locals who posted the video online, the same myth that Heather and her friends have been following. But what awaits them is more gruesome than they could have ever imagined.

When the trailer for the film The Woods was released, some viewers immediately noticed certain parallels to The Blair Witch Project. And indeed, a short time later, it was announced that The Woods would be a sequel to the mother of all found-footage horror films. Blair Witch, directed by Adam Wingard (You`re Next), completely ignores the second installment and picks up where the 1999 cult film left off in terms of content. Daniel Myrick and Eduardo S&aacute;nchez`s film worked so well for several reasons. For one, the now badly overused subgenre was still new and completely surprising at the time. In addition, the promo strategy of the makers was simply ingenious, so that some viewers actually still believed during the film to see real material here - which is of course no longer imaginable nowadays. Moreover, the mini-budget forced the makers to do without special effects and big sound effects. The fact that you didn't actually get to see anything here, and only heard creepy sounds like twigs cracking or children laughing from a distance, made the flick really creepy.

Adam Wingard, on the other hand, really lets it rip in the truest sense of the word. His film is not stingy with sound effects, nor does it refrain from featuring the Witch of Blair. All of this is embedded in a story that is too reminiscent of the first part to provide any surprises. The result is a wasted opportunity to turn a good foundation into a truly terrifying horror thriller. That there is the potential for it is definitely made clear by some scenes. When one of the protagonists has to squeeze her way through a narrow underground passageway, quite obviously pursued by a deadly presence, it's damn exciting. But unfortunately, such scenes are few and far between in a film filled with unsympathetic characters and their utterly stupid actions.

Blair Witch isn't really bad, but unfortunately it's no more than decent average either. And especially from Adam Wingard, who delivered an extremely successful genre contribution with You`re next, more should have been expected here than a lukewarm rehash of the first part. Therefore: If you expect scary horror, you will be disappointed for long stretches. But if you can't get enough of The Witch of Blair and want to see at least a solid sequel, you can safely buy a movie ticket. Worth seeing with some reservations!