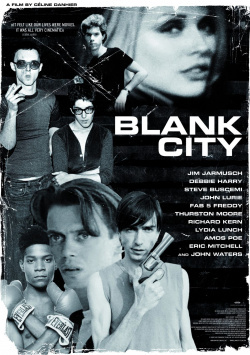 The Lower East Side of Manhattan - and especially the East Village - is now one of New York's most desirable and trendy residential areas. Jewel-toned apartments, expensive boutiques and classy galleries now dominate the look and feel of the neighborhood. But it wasn't always this way. In the late 1970s, many parts of the Lower East Side were extremely run-down and downright extinct. Walking alone through the streets after dark could quickly become a life-threatening affair. The neighborhood was really attractive only for people who did not have much money. Among them were also many artists who made sure that in this part of Manhattan a very own cultural world was created.

Blank City takes a superbly researched and entertaining as well as interestingly compiled look at the artistic underground scene of the Lower East Side in the 70s and 80s. The so-called No Wave Cinema and the Cinema of Transgression originated here. Artists such as Jim Jarmusch, John Waters or Amos Poe were able to find their own voice in this environment, to give their creativity complete free rein. Through numerous interviews with filmmakers, musicians and other artists, as well as filled with numerous clips from the independent films of the time, French filmmaker C&eacute;line Danhier creates an extremely interesting picture of an underground movement that has not been portrayed to this extent before.

The viewer learns what life in the Lower East Side used to be like, how the underground movement of young filmmakers developed from the social circumstances, how they, mostly completely penniless, found necessary film material, what influence music and drugs had on the work of the young directors, or even how commercial successes changed the ideals of some artists virtually overnight. Even though Danhier's film is a homage to No Wave cinema, to its artists and, of course, to New York, the whole thing is not a glorified, idealizing declaration of love. The darker aspects of the era are not left out, nor are criticisms of those who betrayed their political ideals, their radical creativity for money.

Blank City is an exciting film in many ways. From a film history perspective, because the work of the artists of that era continues to exert some influence on the American independent scene to this day, producing such important filmmakers as Jim Jarmusch. But the whole thing is also, from a socio-historical point of view, a gripping document of the city of New York and its inhabitants, showing how quickly not only the image of a city, but with it its culture, can change. If you are interested in film in particular and art in general, this entertaining time travel into the recent cultural history of New York can be warmly recommended. Worth seeing!