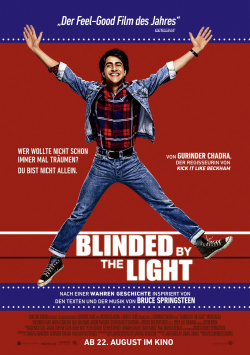 Blinded by the Light

Javed (Viveik Kalra), a British teenager of Pakistani descent, leads a rather bleak life in the small working-class town of Luton in 1987. He is constantly confronted with xenophobia at school and on the street, and at home his father, suffering from his unemployment, rules with a tight regiment. Only in writing does Javed find a way to escape the dreary daily routine. His life changes drastically when a classmate lends him cassettes of Bruce Springsteen's music. The boss seems to speak directly from his soul with his lyrics. Finally he feels understood and finds the courage to follow his own dreams through the music - which is not only disliked by his father.

Another music movie? Yes, but a fully different one than Bohemian Rhapsody and Rocketman were last. True, Blinded by the Light also focuses on the music of an artist - in this case Bruce Springsteen. And anyone familiar with his songs knows that it also reflects his life in some way. Still, the film is not about Springsteen. Only very briefly is he seen on a television screen. But otherwise he is only present in the form of his songs.

Gurinder Chadha, who already staged light feel-good cinema with social relevance with Kick it like Beckham, uses the story of young Javed, inspired by true events, to show what power music and words can have. How much they can help a person who feels lost or who lacks the courage to realize his dreams. The story was inspired by the life of journalist Sarfraz Manzoor and his love of music and the lyrics of Bruce Springsteen. Manzoor, who also co-wrote the screenplay, came to terms with his youth in Luton and his not-so-easy relationship with his father in the 2007 autobiographical book Greetings from Bury Park.

The script and also the production succeed in presenting the sometimes very difficult topics with an adequate seriousness, but at the same time with a charming lightness, which is transported by the great actors in an absolutely believable and rousing way. The way Bruce Springsteen's songs and lyrics are integrated into the story is ingeniously solved, both dramaturgically and visually. And so at the end it remains almost impossible not to leave the cinema with a happy smile on your face. It doesn't really matter if you are a Springsteen fan or not. Sure, you should find the music at least tolerable to enjoy the film, after all it is very present (accompanied by many other 80s classics!). And as a fan, there are some moments that are guaranteed to be enjoyed more than non-fans will manage. But either way, Blinded by the Light is simply a beautiful film that is socially relevant and humanly absolutely charming. For that, it gets a: Absolutely Worth Seeing!

Cinema trailer for the movie "Blinded by the Light (Großbritannien 2019)"
Loading the player ...