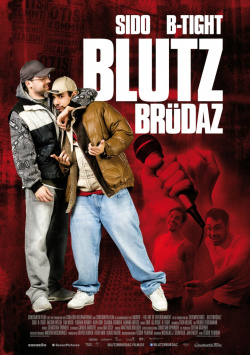 "What Bushido can do, I can do for a long time" Rapper Sido must have thought of that when he set out to conquer not only the music charts, but also the cinemas. But while his former rival and current colleague failed the critics with his biographical feature film and couldn't loosen the crowds in the cinemas, Sido takes a slightly different path with "Blutzbrüdaz".

In this comedy director Özgür Yildirim ("Chiko") takes the audience back to the year 2000, where his friends Otis (Sido) and Eddy (B-Tight) have long dreamed of a great career as rappers. But the road to success is rocky and hard - especially if you, like your friends, have no money and no relationships. But the tide seems to turn when Fusco (Milton Welsh), a legend of the Berlin hip-hop scene, shows interest in a demo tape of the two. With the help of Otis old buddy Adal (Alpa Gun), for whom the word "Checker" seems to have been invented, Otis and Eddy are finally able to produce their demo, which then hits like a bomb. Suddenly the record industry also shows interest in the Blutzbrüdaz, and quickly the two are offered a major deal by the star producer Facher (Tim Wilde). What at first glance looks like the goal of all dreams soon turns out to be absolute hell, especially for Otis, and he has to ask himself whether he is willing to betray his ideals for success and money.

With the help of Fatih Akin's production company, Yildirim has staged an almost satirical look at the commercialization of HipHop, which is particularly surprising in that Sido and B-Tight really perform well compared to Bushido. These also have a really likeable effect, especially because of their obvious self-irony. While "times change you" was rather unintentionally funny, the laughter of the audience here is quite intentional. Sure, that doesn't always work perfectly, some sayings literally go down the drain, but the bottom line is that the comedic aspect of the film is quite convincing.

Very well captured is also the picture of the mass-compatible hip hop teen stars of the early 2000s. The first music video that Facher shoots with Blutzbrüdaz brings back amusing memories of videos by Marky Mark and similar commercially successful artists of the time, who had little or nothing in common with authentic rap and hip hop.

Alongside the authentic look and the convincing main actors, the side characters are also one of the film's big plus points. Alwara Höfels ("Keinohrhasen"), for example, as Otis's bitchy girlfriend, delivers a very convincing performance that is far removed from the charming kindness she displayed in Til Schweiger's successful comedy. And Claudia Eisinger ("13 semesters"), Milton Welsh and Tim Wilde also fit perfectly into the very positive overall acting picture.

Together with the fitting soundtrack, for which Sido of course shows himself to be responsible, "Blutzbrüdaz" has become such a film, that especially, but not only the target group should like it. Surely it might be an advantage to like Sido in order to have a lot of fun with this movie. But even those who don't know much about the rapper, his music and the whole hip-hop world will still be entertained astonishingly well. Certainly not an absolutely credible masterpiece, but without question a very positive surprise at the end of the year! Worth seeing