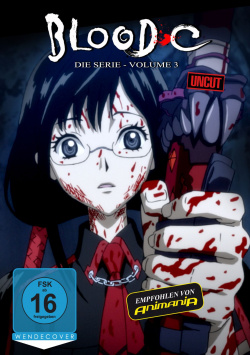 Content: At first glance, the lovable but somewhat clumsy Saya Kisaragi is just a normal schoolgirl. But Saya, trained in the art of sword fighting by her single father, has a secret: at night, she uses her skills to fight Old Ones - horrific monsters that feed on humans. It's a fight that always claims terrible victims. Most recently, Saya's class chambermates Nono and Nene were brutally murdered. Saya blames herself terribly and does not want to continue the fight. Moreover, she suspects that her father has not told her the whole truth about her destiny. But then Saya has a vision that shows her the cruel consequences of not continuing to confront the Old Ones...

Blood-C is the third entry in the Blood franchise, which is very popular with anime and manga fans, following Blood - The last Vampire and Blood +. Since the story of Saya's fight against the Old Ones has been told rather sluggishly and not particularly rousing, especially at the beginning, Blood-C could not really meet the expectations of many fans of the franchise. So after twelve episodes, which were followed by a movie, Blood-C was already over. Admittedly, the series really needs time to get going a bit. But those who have fought their way through the first episodes will notice that the action picks up considerably towards the end. In episodes 7 through 9, which are available in unabridged form on this third DVD, there's not only plenty of blood and dueling. Also about the actual purpose of Sayas the viewer finally learns more.

Suspense, some humor, a pinch of eroticism and strong fantasy and horror influences give the series in the last third a decent entertainment value. Certainly, the whole thing doesn't come close to Blood - The last Vampire in terms of quality. But the harsh criticism the anime series has received, especially from fans of the genre, can't quite be understood from my (admittedly rather untrained in matters of anime) side. The almost 70 minutes running time of the DVD pass despite some somewhat tame moments like in flight and at the end remains the desire for more.

Who has followed the series so far and liked it at least to some extent, should definitely stay on the ball, because it is on the home stretch in terms of tension and dramaturgy noticeably forward. No real anime masterpiece, but a quite entertaining mixture of fantasy and horror, which is well worth watching, especially in uncut form!

Picture + Sound: The image of the DVD is very clean and pleases quite particularly by its rich coloring. Especially the very intensely used red shines in powerful brilliance. Also in terms of image sharpness, the anime series is on a good level. The sound is mixed rather centrally, large surround effects are hardly detectable even in the action-heavy scenes. The bottom line is that all this is still enough for a satisfied: Good!

Extras: Except for trailers, the DVD unfortunately has no other extras to offer.

Conclusion:The episodes 7 to 9 of the twelve-part anime series Blood-C offer a lot of blood, some action and a still rather slow, but still clear development of the story. While especially the very leisurely beginning of the short-lived series did not really go down well with fans of the franchise, there is nevertheless a noticeable increase in quality towards the end. If you liked the series so far, you shouldn't miss these three uncut episodes, which are quite entertaining despite some minor lengths. Recommended