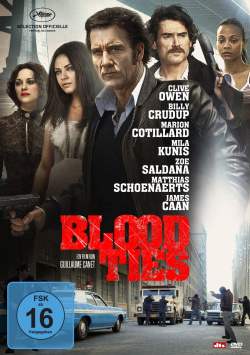 Film: New York, 1975: When gangster Chris (Clive Owen) is released prematurely from prison for good behavior after a few years, his brother Frank (Billy Crudup) hopes that Chris won't get back on the wrong track right away. Because Frank risks a lot when he helps his brother, as he himself is a policeman with a promising future - and he doesn't want to put that at risk for a member of his family. In fact, it looks like Chris is taking his last chance at a life without crime. But appearances are deceptive and it doesn't take long for Chris to resort to illegal means again in order to offer his new girlfriend (Mila Kunis) a decent life. When the situation gets out of hand, Frank is forced to choose between the law and his brother - a decision that can have fatal consequences...

2008 the French actor and filmmaker Guillaume Canet played the leading role in the thriller "Rivals - Two Brothers: A Cop... a "bank robber" of Jacques Maillot. Canet has now used this material for his English-language directorial debut and with "Blood Ties" has staged an atmospheric US remake of the thriller drama based on a novel by Bruno Papet. In return, he was able to win a great ensemble that, in addition to the French Oscar winner Marion Cotillard, also features stars such as Clive Owen, Mila Kunis, Zoe Saldana, Billy Crudup and the legendary James Caan. And even smaller supporting roles are cast with actors like Noah Emmerich ("The Americans"), Lili Taylor ("Conjuring") or the Belgian Matthias Schoenaerts, Cotillard's partner in "The Taste of Rust and Bone".

However, the film not only offers first-class acting. Even the 70s look was perfectly captured by equipment, color filters, clothing and soundtrack. You really get the feeling to see a thriller from the "French Connection" era again and again. And in the last act the whole thing has the quality of Ben Affleck's "The Town" in terms of intensity. All this makes Canet's US debut very worth seeing in itself. However, his staging also has several lengths. Especially in the first hour the story goes on and on and even the good play of the actors can't prevent the emergence of a certain boredom.

However, it's really worth it to get through these tough passages. Because the further the story progresses and the deeper Frank is drawn into the conflict between his family and the law he is supposed to represent, the more interesting and exciting the film and its protagonists become. For although at the beginning it still seems as if the characters were very clearly drawn, they reveal more and more shades, through which all clear boundaries between good and evil, between right and wrong seem to blur more and more.

"Blood Ties" did not become the masterpiece for which it had the potential due to the cast, the exciting basic idea and also the visual realization. But despite some very lengthy scenes the whole thing is still a thriller drama worth seeing, which lovers of the more classic gangster cinema shouldn't miss. Recommended!

Picture + sound: The visual implementation of the DVD captures the 70s look of the film well due to the very atmospheric coloring. The image sharpness is on a good level and also smaller details are shown to advantage especially in the brighter scenes. The German sound is in a good Dolby Digital 5.1 mix and a somewhat more powerful dts track. Although the surround channels are not often used to a great extent, the atmospheric ambient noise also ensures that a very atmospheric sound carpet is created. Good!

Extras: As a bonus there are twelve cut scenes (approx. 20:05 min.), which have some very worth seeing moments to offer in addition to the trailer and a good making of (approx. 25:40 min.). It is quite possible that these sequences would have additionally slowed down the already worn tempo. However, some of these edited moments would have done the dramaturgical framework some good, as they bring some more depth into some of the side plot strands. Worth seeing!

Fazit: "Blood Ties" is a top-class drama with thriller elements, which comforts many very lengthy scenes with an atmospheric visual language and some very intense moments and can leave a positive overall impression at the end. However, a little more speed would have done the sad family history good. The DVD presents the film in harmonious picture and sound quality and also the bonus material is really worth seeing. For lovers of very character-oriented thrillers with a rather classic flair we recommend this one!