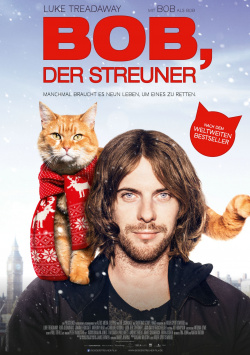 Although it may sound like a hackneyed phrase, it's true that sometimes life writes the best stories. Such as in the case of James, a drug-addicted street musician who found a new purpose in life through his encounter with Bob the cat and eventually made it off the streets. After this story has already become a bestseller in book form, the successful film adaptation is now coming to our cinemas.

Luke Treadaway plays the role of James in it, who gets his last chance from his social worker Val (Joanne Froggatt): a small apartment where he is allowed to stay as long as he stays clean. James finds this increasingly difficult. But when a stray cat suddenly turns up in the small apartment, turning the young man's life completely upside down, James suddenly has to take responsibility for more than just himself. The cat, which he christens Bob, does not leave his side and the unequal duo becomes a hit on the streets of London. But when Bob disappears one day, James is in danger of falling back into his old, self-destructive patterns.

In Germany alone, Bob the Stray spent a full 27 weeks at #1 on the bestseller lists. Readers who are addicted to the lovable cat should not miss the film adaptation of his story. After all, Bob plays himself here - and with wonderful composure. Director Roger Spottiswoode (James Bond - Tomorrow Never Dies) has directed a genuinely charming family film about an unlikely friendship, which admittedly tones down some true events a little for the film's mass appeal. Still, it must be said that this is not a film for children. When an acquaintance of James dies of an overdose or he himself detoxes his body, it's too hard for little viewers to watch. Sure, the cat is cute and there are some quite adorable, but also funny moments.

But it's also about the fact that Bob led to James making the hard way away from drugs - and that just has to be shown with some consequence. But don't worry: Bob the Stray is not a depressing social drama - even if there are some dark scenes. Rather, the bestseller adaptation offers real feel-good cinema with a very nice message and an animal star who now really steals the show! Cat lovers, fans of the book and everyone who likes beautiful movies about special friendships should not miss this charming film. Worth seeing!

Cinema trailer for the movie "Bob the Stray (Großbritannien 2016)"
Loading the player ...