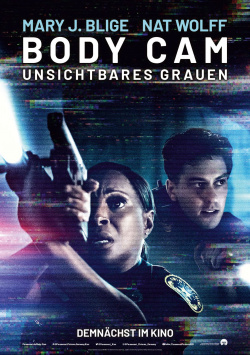 Police officer Renee (Mary J. Blige) is in shock after the murder of a colleague. It's not just that he was killed during a simple traffic stop that bothers her. The fact that apparently only she was able to see the footage from his body cam also bothers her. Especially as mysterious incidents and murders pile up in the course of the investigation, in which Renee seems to be directly involved. Renee is not believed by her superior. Only her young colleague Danny (Nat Wolff) still stands by her side. But when Renee discovers what is behind the horrific incidents, she realizes that she and her partner have long been in real mortal danger as well.

"Body Cam" seems at first glance to be a thriller about police violence and corrupt cops. But it quickly becomes clear that director Malik Vitthal is just using the subject as a backdrop for a rather classic horror film. Especially at the beginning it works really well. Vitthal manages to build up an atmosphere that is eerie and oppressive not only because of the supernatural elements of the story. Some pretty bloody effects make sure that at least for genre fans this positive impression is confirmed. The mixture of cop thriller and urban ghost story actually seems to work.

That the whole thing (despite good actors) is located rather in the midfield acting, is not further disturbing. The last third of the story has a much more negative effect on the overall impression. No question: there are some effective scenes here, too. But Vitthal just doesn't want to bring his story to a satisfying end. Too many good ideas that the film started with fizzle out in an arguably conventional and predictable resolution that could have used more rough edges and a few little surprises, even given the topical subject matter in which the action is embedded.

"Body Cam" is not a bad film. It just wastes a lot of potential in favor of all-too-familiar genre set pieces, so unfortunately it doesn't end up having a lasting effect. But even if this ghost fairy tale is quickly forgotten, the strip offers fans of not too crude (but not entirely bloodless) horror fare entertaining entertainment. For this there is then at the end also a satisfied: worth seeing!