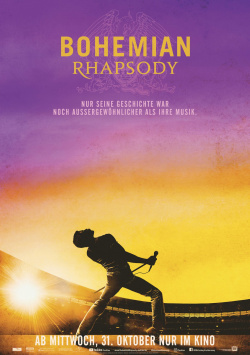 He was a great singer with a voice as special as his personality. When Freddie Mercury died of AIDS in 1991, the music world lost one of the greats far too early. Even if his band Queen hasn't stopped making music and going on tour, Mercury's death has lost a magic that even the great talent of Brian May and Roger Taylor can't absorb. After all, Freddie Mercury remains immortal through Queen's songs. Although almost thirty years have passed since Mercury's death, it was still a venture to shoot a biopic about him and his band colleagues. Because how could an actor succeed in capturing what made the great artist so special.

Director Bryan Singer dared to do it anyway. The result is "Bohemian Rhapsody", a film that is above all one thing: a tribute to the music and what it means to the fans. Some critics accuse the film of being softly washed and almost completely excluding the dark side of Freddie Mercury's character and especially his AIDS disease. On the one hand this is only partly true, on the other hand you have to ask yourself: do you really want to see it? Singer has made a film that does what Queen's music does when it's listened to: it's rousing, fun, touching and in the end leaves a feeling of real happiness after various emotions.

There it really doesn't matter if the singer's homosexuality isn't traced down to the smallest detail or that parts of his eventful life are left out. And - I say this as a real fan - it doesn't really matter whether everything that is shown here actually corresponds to reality. The film, which was completed after a quarrel between Singer and the studio of "Eddie the Eagle" director Dexter Fletcher, doesn't want to be a personality study that immerses itself in the abysses of a truly not-so-simple person like Freddie Mercury. He wants to celebrate with the fans the music of a great band and an eccentric, talented and unforgotten artist. And he does that very, very well.

That is of course also due to the award-winning performance of lead actor Remi Malek ("Mr. Robot"), who really gives everything - including fake teeth - to capture the dazzling and multi-layered personality of Freddie Mercury. In some scenes he also succeeds in doing this almost perfectly. The performances of his excellent cast co-stars are somewhat overshadowed by his playing, but they still manage convincingly to transport the rest of the band and their meaning for the songs and for Freddie Mercury's life to the big screen.

Although Bryan Singer caused a lot of trouble on set and allegedly had a fierce quarrel with his main actor, he still deserves a good portion of respect. For staging an almost 15-minute sequence of the legendary LIVE AID performance at the end of the film. Here dramaturgy no longer plays a role, but only the music and the performance of the actors. It is therefore a courageous sequence because it goes against the viewing habits of the audience. Maybe that's why this scene works so well. Having no tears in your eyes when Rami Malek presents "Bohemian Rhapsody" with absolutely authentic fervor is really a performance.

Yes, in this biopic some clichés are used. A lot is omitted and yes, many corners and edges are sanded down for mass production. But not only is the film a great performance, it is also a real joy - the joy of watching and the joy of music. And exactly for this there is a very clear one: Absolutely worth seeing! ]