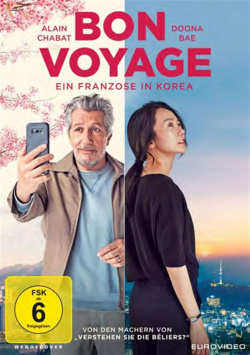 film: The divorced chef Stéphane (Alain Chabat) always finds the right spice for the dishes he serves in his restaurant. But in his life, unfortunately, the right spice has been missing for a long time. This changes when he meets the korean Soo (Doona Bae) through Instagram. The two regularly exchange news and thus get closer and closer to each other. When Soo writes him that the cherry blossom season starts in Seoul and that she would like to experience this together with him, Stéphane gets on the next plane to South Korea. But what awaits him at Seoul airport is not what he had hoped for.

"Bon Voyage - A Frenchman in Korea" is relaxed feel-good cinema at its best. Director Eric Lartigau, who in 2015 with "Verstehen Sie die Béliers?" was able to land a real surprise success at the box office in Germany as well, tells a very charming story which after about twenty minutes takes a slightly different course than one might initially expect. From there, the comedy takes a path towards a finale, which fortunately does not force the end that suggests the initial situation. Without wanting to give too much away, it has to be said that Lartigau hasn't staged a romance, but rather a self-discovery comedy, which can score with pleasantly reserved humor, loveable characters and very nice character moments.

Alain Chabat is simply wonderful as a cook, bored by life, who is looking for new fire in his life. He is accompanied by numerous likeable characters, who all seem to be very authentic - from policemen to a korean cook to the cleaning lady at the airport. Lartigau manages very well to create characters and moments, with which you as a viewer really enjoy spending your time. Thus, the movie also becomes a light short vacation for the soul - and that just feels good!

At the same time the movie is also a commentary on social media on the internet. Not just about the fact that you can never know what a person you only know online is like in real life. But also about the absurd way in which some people achieve popularity on the net. This may be a bit exaggerated here, but it is very funny because it is really not far from reality. In the end - and Lartigau underlines this in a pleasantly subtle but effective way - all that counts is real life and the people who love you not only in the form of a "like me".

Surely, the wheel is not being reinvented here and many a cliché is being used. But at the bottom line this movie just makes you smile and lets you forget your everyday life for about 90 minutes. And just for that alone there is a clear statement: Absolutely worth seeing!

Picture + Sound: Whether the beautiful landscape shots or the very special atmosphere at the airport of Seoul - the good picture quality of the DVD captures the visual advantages of the film very well. Powerful colors, a quite high sharpness and coherent contrasts leave a very positive overall impression. Due to the genre, the Dolby Digital 5.1 mix is rather reserved. Apart from the dialogues, the soundtrack and an atmospheric sound backdrop (especially in the scenes that take place at the airport) ensure that the tonal events are not only directional, but also take place on the surround channels. Good!

Extras: As an extra there is only the trailer. What a pity! "Bon Voyage - A Frenchman in Korea" is a charming feel-good movie, which tells its really beautiful story with reserved humor, beautiful pictures and charming characters. The DVD presents the comedy in good picture and sound quality, but does not offer any bonus material. Nevertheless: If you like unobtrusive culture-clash comedies and just want to switch off for an hour and a half, then this is the right place for you. Absolutely recommendable!