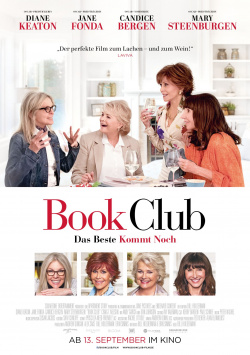 Book Club - The Best is Yet to Come

For decades, friends Vivian (Jane Fonda), Diane (Diane Keaton), Carol (Mary Steenburgen) and Sharon (Candice Bergen) have met month after month for their book club. Especially now, in the autumn of their lives, when sex is hardly an issue anymore, the book club evenings are an absolute must for the friends. But then the otherwise leisurely meeting is thrown into complete turmoil when Vivian suggests Fifty Shades of Grey as their next read. The book makes for unexpected fantasies, which each of the four women deals with differently, but which always makes for plenty of emotional turmoil. Book Club is experiencing a second spring - until Diane has to break some bad news to her friends.

Admittedly, the trailer for Book Club - The Best is Yet to Come looked hilarious to me. Trite jokes about older ladies whose hormones are going crazy after reading Fifty Shades of Grey - it seemed more embarrassing than funny. But one thing that can be said, thankfully, is that the whole film is far better and more amusing than the publicity stunt would lead you to fear. Sure, director Bill Holderman has not staged a big hit, but only a harmless comedy, but it still offers about 100 entertaining minutes not only for the generation 50+.

That the film works, is not only due to the play with exaggerated clichés. It makes for pleasant smirks every now and then, but ultimately it's thanks to the good-humored ensemble that this second spring offers decent entertainment despite its lack of depth. Candice Bergen in particular is great as a poised judge who has actually long since come to terms with being alone, as is Jane Fonda, who as the exact opposite can't get enough of men even at an advanced age. And we can also be really happy about a reunion with Don Johnson, whose daughter Dakota, as we all know, bounced through the Fifty Shades adaptations textile-free.

Yes, it may not be the best yet to come here, as Book Club's German subtitle promises. But with a few good laughs, a dose of charm and convincing actresses, this agile book club is really fun. And for that there is then also a proper: worth seeing!