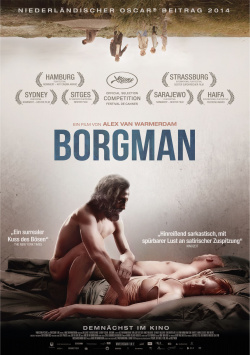 Hobo Borgman (Jan Bijvoet) lives in an underground hideout in the woods. When he is chased by a group of violent men, Borgman flees to a posh mansion district where he tries to find shelter with the family of Richard (Jeroen Perceval) and Marina (Hadewych Minis). But Richard drives the down-and-out stranger away and even beats him up. This arouses pity in Marina, which is why she doesn't reveal to her husband that Borgman is hiding in their summerhouse and she secretly allows him to use her bathroom. A special relationship quickly develops between the two, which leads the tramp to become part of the family. But this can only be done with a new identity. As the new gardener, Borgman manages to be accepted into the posh home by Richard as well. But what is the mysterious man really up to?

Already in The Last Days of Emma Blank, director and actor Alex van Warmerdam has revealed a penchant for quirky and extremely black humour. Even there, he repeatedly interrupted clear narrative structures for very whimsical moments and skillfully led the viewer astray time and again. He has maintained this style in his latest work Borgman and even increased it many times over. There are always scenes or dream sequences where the viewer wonders what the whole thing is about. What in many other movies would lead you to turn away annoyed from the action, has here a rather opposite effect. Because van Warmerdam always uses extremely weird humor at the right moment and thus loosens up the oppressive atmosphere a bit, you like to stay on the ball as a viewer - even if you don't really know why.

The production skillfully balances between thriller, family drama, pitch-black comedy and disturbing avant-gardism back and forth. In doing so, he gives his film a very special flair that is hard to escape as a viewer. And every time you think you have the story figured out, there is a new twist that turns everything upside down again. Admittedly, the whole thing is very hard to get into. As a viewer, you have to be willing to get involved with the carried narrative pace, the cryptic staging and the very quirky humor. You should also refrain from really wanting to understand everything. If you manage to do that, you might enjoy Borgman even more than the surprise success The Last Days of Emma Blank.

At various film festivals, the unusual thriller was celebrated frenetically and also won some awards. And even if the film will certainly not attract the very large crowds in the multiplexes, the chances are good that it could advance to a small cult hit in the art house cinemas. Because even if the film will only be accessible to a few, it is fair to say that there have been few works this year that are even more unusual and drill themselves into the viewer's brain in such a lasting way as Borgman. And therefore applies - at least for arthouse lovers who appreciate very special challenges: absolutely worth seeing!

Cinema trailer for the movie "Borgman (Niederlande/Belgien/Dänemark 2013)"
Loading the player ...