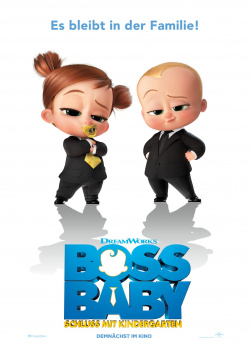 Successful businessman Ted Templeton can't remember the events surrounding Baby Corp and his time as Boss Baby. He hardly has any contact with his brother Tim. He enjoys his life as a full-time dad, but finds that time goes by far too quickly. His older daughter Tabitha now feels too old to give her dad a kiss - a handshake has to suffice as a goodnight greeting. The culprit seems to be her new school, which has a very special education and learning concept. How dangerous this could become, Tim has to learn from his baby daughter Tina, of all people, who reveals herself as an undercover agent of Baby Corp. Together with Ted, Tim is to uncover what's going on at her sister's school and put a stop to the mysterious principal. But to do so, Ted must once again become Boss Baby...

"Boss Baby", based on a picture book by Marla Frazee, was a huge hit in theaters in 2017, first continuing in a television series. So now, with "Boss Baby - Schluss mit Kindergarten", the inevitable film sequel is coming to our cinemas. Clearly, if you liked the first movie, you'll like this second installment. The gags are in exactly the same vein and even if the story tries to break new ground, there are still many parallels to the predecessor. In this respect, the new appearance of the Boss Baby can be called quite successful, since the target audience is satisfied.

But: A really good film is the whole therefore still far not. The movie has no charm, is completely over the top and uninspired. Every two or three minutes there is a hectic "action scene", interrupted only by dripping-kitschy "family-is-the-highest-good" moments. Really good gags? Missing! A story with wit and heart? Far from it. There are so many really nice animated films for children and for families- this one is unfortunately not one of them.

Now a word about the dubbing: Here once again the unspeakable trend of choosing voice actors and actresses not according to their talent but according to their level of popularity with the target audience makes itself negatively felt. In my opinion, this is a slap in the face of professional voice actors, who are always overshadowed anyway. In the press and promo material for "Boss Baby - Schluss mit Kindergarten" it is also heavily advertised that the successful YouTuber Saliha "Sally" Özcan has taken on a role. Her fans may forgive me for saying so, but she really doesn't do a very good job in this. Dieter Klebsch, on the other hand, who carries large parts of the film as Boss Baby and captures the character of the original very well, is not mentioned at all. This may be understandable from a marketing point of view, but it also shows how little the work of real talent in this field is appreciated.

"Boss Baby - Schluss mit Kindergarten" is certainly nice fun for fans of the first film and the series. And for this audience the whole thing is then also worth seeing - but all others should give a wide berth to this brightly colored crawl.