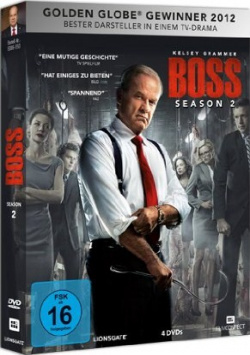 Content: Chicago's mayor Tom Kane (Kelsey Grammer) has a hard time accepting that he suffers from a degenerative nervous disease that makes him increasingly lose control of his body. But Kane neither wants to give himself nor his office up so easily. That is why he conceals his illness and has fought with all his strength for re-election. This is indeed won and the political opponents are finished. But Kane cannot rest on his laurels. More and more often, his illness returns with intensive relapses. In addition, his wife Meredith (Connie Nielsen) was seriously injured in an attack that was clearly aimed at Kane. In his prestige project around the social housing estate Lennox Gardens, he repeatedly encounters difficult resistance. And finally, Chicago is threatened by insolvency. So the prospects for his second term are anything but rosy. But Kane is right to use any means at his disposal in order to stand as a victor in the end and leave behind a glorious political legacy. And there he also accepts that he has to make one or two sacrifices - and neither close confidants nor his own family are safe from that...

"Boss" is one of the series that can serve as a good example for the high quality of contemporary serial food. Multilayered characters, sophisticated scripts, a gripping dramaturgy and first-class actors make this political drama a very entertaining, but also demanding TV series. Already in the first season the machinations of mayor Tom Kane were sometimes very complex food, which demanded full attention from the audience. And so it goes then also in the second and unfortunately also already last season further. It may be that the very political themes and the very gloomy atmosphere were the very reason why "Boss" didn't find the larger audience that this series deserved. The lack of commercial success, however, says nothing about the quality of this very high-quality production. Because this is also on a very high level with these final ten episodes.

This is not only due to the good scripts and the very engaging camera work. It's also the strong actors who make "Boss" so worth seeing. First and foremost, of course, Kelsey Grammer, who here as far as possible distances himself from the role of Dr. Fraiser Crane, which he played in "Cheers" and "Fraiser" for over two decades and which has made him one of the most popular TV personalities in the USA. But Mayor Tom Kane has nothing in common with the slightly neurotic, yet extremely sympathetic psychiatrist. Grammer shows here that he can also act really threatening and ice-cold. But he may show different sides of the politician. On the one hand, there is the side oriented towards his legacy, which goes over corpses in order to realize its goals. Whoever gets in Kane's way will be eliminated - in whatever way. But there is also the other side, marked by fear and insecurity, caused by his illness. More and more in the course of the second season, Kane is followed by hallucinations that throw him off course again and again - even if only for a fraction of a second. How Grammer can switch in a few moments from the politician with the ice-cold look to the vulnerable man and back again is simply great.

But also the rest of the ensemble delivers very good work here. Embedded in a mixture of thriller and drama, spiced with a pinch of eroticism and lots of intrigues, many of the supporting actors are in top form. Admittedly, the fact that the series almost completely lacks the lighter sides and the action is almost completely gloomy makes "Boss" a very heavy fare. But those who get involved with the sound and devote their full attention to the various storylines will be rewarded with first-class TV food, which is very authentic and damn excitingly staged. Absolutely recommendable!

Picture + sound: The technical implementation of the DVD leaves a consistently positive overall impression. The good image quality reveals the first-class camera work, which can easily be compared with many cinema productions. The picture is clean, the color scheme is very atmospheric and the sharpness of detail is on a very good level, especially in brighter scenes. The tone, which is not unusual for a drama series, is rather reserved, whereby the dialogues, which sound a bit centrally mixed, set the tone. But at least every now and then more discreet ambient noises make sure that the surround channels are used at least a little bit. Gut!

Extras: The second season has an optional subtitled audio commentary for episodes 1, 5 and 10 by producer Dee Johnson and one guest each. They are very informative and for fans of the series interesting comments, which are complemented by a 15-minute featurette about the second season. Gut!

Fazit: "Boss" is also in his second and unfortunately already last season first class TV entertainment, which combines political drama with thriller elements full of suspense, a pinch of eroticism and great acting to a gripping whole. Especially leading actor Kelsey Grammer leaves a lasting impression. The DVD box of the second season presents the individual episodes in good picture and sound quality and also has some informative audio comments and a neat promo featurette to offer. For fans of high-quality US series entertainment, the same applies as for the first season: Absolutely recommended!