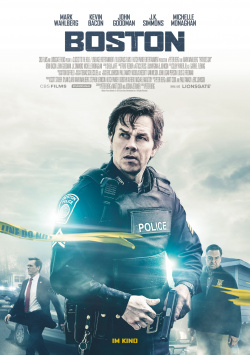 15. April 2013 - Although many thousands of people have once again gathered in the city to participate in the Boston Marathon or to cheer on the runners along the route, Police Sergeant Tony Saunders (Mark Wahlberg) and his colleagues assume that this year's event will be quiet and peaceful. But suddenly, two explosive devices go off on the home stretch, killing three people and injuring more than 200 others. The entire city is in shock, but there is no time for police and FBI investigators to mourn the victims. They need to find the assassins before they can go into hiding. And soon they have a hot lead - a race against time begins.

With Boston, director Peter Berg has followed up Deepwater Horizon and Lone Survivor with another film based on true events, starring Mark Wahlberg. The hunt for the Boston Marathon bombers dominated the news here in April 2013. The events are still quite fresh and present. To process them cinematically therefore also involves a certain risk. But Berg has mastered this surprisingly well. He does lay it on a bit too thick in some of the dialogue scenes, fortunately only waves the patriotic flag a bit too vigorously in a few moments and draws some of the characters a bit too one-dimensional. Otherwise, however, he has succeeded in a really gripping thriller, which is fortunately the terrible events little striking.

So, for example, the actual assassination is implemented oppressively realistic. Berg refrains from overly lurid moments, but he does show in unsparing cruelty what such a cowardly assassination can do. But he does an even better job of portraying what it does to the people involved, especially the police officers who witnessed the horror and are now doing everything they can to find those responsible and bring them to justice - whatever you might think of that. The well-crafted realization, the in some scenes very authentic tracing of the events and the convincing ensemble of actors, which besides Wahlberg also include Kevin Bacon or J.K. Simmons, ensure that this film works very well despite minor weaknesses.

Boston is therefore first and foremost a very exciting thriller, which - although the outcome should be known to everyone - is grippingly staged until the last minute. If you can overlook some moments that are a bit too thick, you'll get some really thrilling and well-acted fare that's just a bit hard to swallow in places. For this there is clearly one: Absolutely worth seeing!