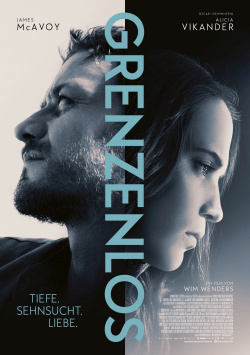 When Danny Flinders (Alicia Vikander) and James More (James McAvoy) accidentally meet in a remote hotel in Normandy, the sparks between the two quickly sparkle. In the picturesque seclusion they enjoy a romantic break before they have to return to their real lives. When they have to split up, they don't know if it will be forever. While Danny sets off to search the seabed for answers to the origin of life, James has to fight for his survival on a mission in Somalia…

With "Grenzenlos" Wim Wenders has staged a film that should be a great emotional cinema. Not only because of two great actors and some wonderful pictures, but especially because of the story. It is about two people who find each other only to have to separate again. So far, so well known. But then life strikes in all its tragedy: James becomes the hostage of jihadists and must expect to be killed at any moment. Only the thought of Danny keeps him from completely giving up hope. But even for the biomathematician, the research trip becomes a real test with a very dramatic twist.

All of this should constantly and especially in the end drive the viewers to tears in their eyes. But somehow the movie just can't do that. There are some really wonderful moments, which are also touchingly realized. But all in all Wenders makes the mistake of telling a story that is only so overflowing with emotional power in a rather distanced way. He loses himself in an admittedly fascinating visual language and in meaningful symbolism, but a story like this would have needed much more - even if it might have become a bit kitschy.

"Boundless" allows his actors to get very good performances out of themselves. But the director simply doesn't support them enough to meet the audience there, what the story actually aims at: right into the heart! So the whole thing isn't fish and not meat, but a somewhat tenacious romantic drama with great actors - but for more than just a "with some cutbacks worth seeing" this isn't enough, unfortunately.

Cinema trailer for the movie "Boundless (Deutschland/USA/Frankreich 2017)"
Loading the player ...