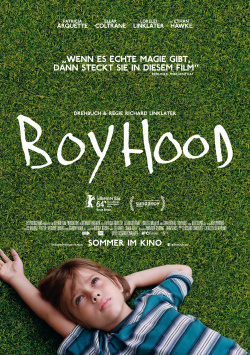 It is a most interesting and in its way unique film experiment that director Richard Linklater delivers with Boyhood. Over a period of eleven years, the filmmaker has shot short episodes over and over again with the same ensemble of actors, from which he has now traced six-year-old Mason's (Ellar Coltrane) journey through his childhood. What begins with a move to Huston with his mother Olivia (Patricia Arquette) and older sister Samantha (Lorelei Linklater) brings, by the time he enters college, new friends, a bossy stepfather, outings with his long-absent father Mason Sr. (Ethan Hawke), more moves, first love, fights, longings, temptations - just normal life with all its ups and downs.

To embark on this experiment was very brave. After all, not only did we have to find regular periods of time when everyone involved had the time to shoot. Secondly, there was the fear that one of the actors would want to drop out of the project at some point. Fortunately, that didn't happen, even though Linklater's daughter Lorelei, of all people, wished after a few years that her father would let her character die. Stories tracing a child's path to adulthood have been plentiful. But they usually involved different actors or makeup effects. Not so here. And the effect this creates is then the primary reason why Boyhood works so well.

Because it doesn't feel like you're watching some over-stylized artificial characters here, but that you're following the lives of real people. As a result, after just under three hours, you feel like you've spent a lot more time with these characters, that you've been able to participate in their lives. Although there is actually no story in the conventional sense and Linklater instead only offers sporadic snapshots, there is a very intense and involving effect that makes Boyhood such a special film. This is largely due to the fact that the film offers many viewers the opportunity to rediscover memories of their own childhood here, or to identify with other aspects of the plot.

Boyhood is a slice of real life. The way Richard Linklater has captured that is just great. However, only if you're into it or are generally interested in unusual film projects. On the other hand, if you just want to be entertained and hope for a rousing story, the film could turn into a downright yawn-fest. Because three hours, in which not much happens, is a damn long time, especially since the characters with all their very human weaknesses are not made to be the very big sympathizers in the first place.

But that only becomes a disturbing factor if you approach this film with false expectations. If, on the other hand, you look at it purely as an experiment and as a very true-to-life work of cinematic art, Boyhood is very, very great cinema and a truly wonderful piece of work. And as such, the film is then also despite minor lengths: Absolutely worth seeing!