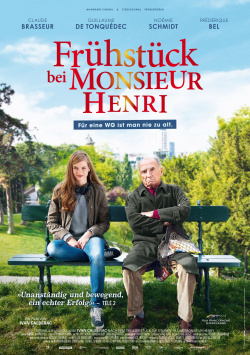 Young student Constance (No&eacute;mie Schmidt) dreams of finally being independent and studying in Paris. However, since she barely has any money, she has to take what she can get as a place to stay in the metropolis. A room in the apartment of grumpy pensioner Monsieur Henri (Claude Brasseur) seems almost perfect. While the old man isn't exactly a paragon of kindness, the young woman will somehow manage that with her boundless optimism. But with another thing it looks already more problematic: Constance can't afford the rent and security deposit anytime soon. But then Monsieur Henri makes her an unusual offer..: If Constance manages to turn his son Paul's (Guillaume De Tonqu&eacute;dec) head in such a way that he leaves his wife Valerie (Fr&eacute;d&eacute;rique Bel), whom the old man can't stand, she can live in the room for free. Reluctantly, Constance accepts the proposal, unaware of the family chaos she will cause.

Originally, director Ivan Valb&eacute;rac wrote his new comedy Breakfast at Monsieur Henri's as a play before adapting it for the cinema. There are several reasons why the multi-award-winning play works well on the big screen. True, large parts of the story take place in the apartment on Monsieur Henri. Nevertheless, Calb&eacute;rac exploits the possibilities of the visual language of cinema very well. This doesn't just refer to beautiful shots of Paris. Even with the scenes set in the apartment, the film never feels like a chamber drama. But the camerawork isn't the only reason why the journey from stage to screen worked so well.

The coherent pacing of the production, the amusing dialogue and, most importantly, the actors also make this charming comedy quite a pleasure to watch. Claude Brasseur is simply wonderful as the crotchety old stubborn man. Although his Monsieur Henri does everything to make you dislike him, Brasseur turns the grumpy pensioner into quite a sympathetic character that you just have to love. No&eacute;mie Schmidt, who recently made her breakthrough in the series Versailles, exudes an engaging naturalness that you fall for very quickly. This mismatched duo carries the film over all the highs and also over isolated lows, which are thus no longer recognizable as such. Clichés, dramaturgical hangs or not quite accurate gags are almost completely covered by the charm, which radiate actors and staging.

Even if the end is very predictable at some point and even if you get nothing here, what you have not seen before, so is Breakfast with Monsieur Henri perfect feel-good cinema with a lot of wit and heart. If you like easy-going French comedy entertainment, you shouldn't miss this amusing charm offensive. Absolutely worth seeing

Cinema trailer for the movie "Breakfast at Monsieur Henri's (Frankreich 2015)"
Loading the player ...