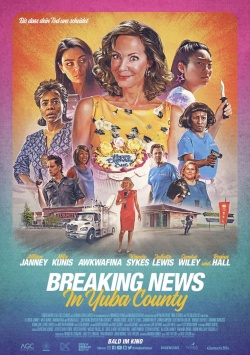 Sue Buttons (Allison Janney) is an unassuming woman who is barely noticed by more than just her husband Karl (Matthew Modine). That changes when hubby disappears without a trace. Sue plays the worried wife in the media and quickly becomes a media sensation. Yet she knows exactly where Karl is. But her secret seems safe - until an overly nosy cop (Regina Hall), Sue's half-sister (Mila Kunis) and an ice-cold junior gangster (Awkwafina) want to solve Karl's disappearance as well, asking questions that Sue doesn't really have the answers to. Is the dream of sudden fame already over?

With "Breaking News in Yuba County", director Tate Taylor ventures into new territory after his acclaimed drama "The Help", thriller "Girl on a Train" or horror film "Ma". His suburban comedy with a touch of media satire is fast-paced and has a great cast. Especially Allison Janney and Regina Hall deliver really good performances. But unfortunately the igniting spark in the overloaded story never really wants to jump over. It's hard to find out why.

Because the script is full of good ideas. Taken on their own, these also work very well and make for some thoroughly amusing moments. But when Taylor tries to bring the individual plot lines together, it degenerates into a chaos, which unfortunately doesn't seem to be funny or meaningful, but just strained and flat. Even the ensemble, which is good in itself, can only do so much. Taylor tries too hard to give his film the coolness of a Coen brothers film and the dialogues the cleverness of the early Tarantino works. But he doesn't even begin to succeed. Taylor's production lacks not only the necessary lightness, but also a clear line that would have propelled the entertainment factor to the finish line.

However, unfortunately, he never gets there. So "Breaking News in Yuba County" falls short of its potential at almost every moment. Sure: There are a few good moments and even the odd laugh. But overall, the whole thing is a very mediocre comedy that leaves a lot of potential unused in front of and behind the camera. For this there is then also only one: Very conditionally worth seeing!