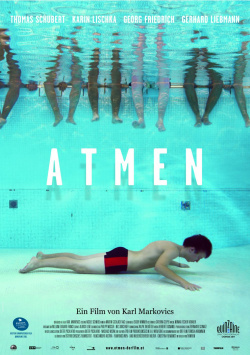 19-year-old Roman Kogler (Thomas Schubert) is in juvenile detention. He's a loner, absolutely secretive. Socialization doesn't seem to work for him. Nevertheless, his probation officer (Gerhard Liebmann) does not give up. He urges Roman to take on a job as a free man in order to regain a foothold in society before he is released. Roman wants to try his luck at a funeral home, of all places. And even though he is extremely antagonized by his new colleague Rudolf (Georg Friedrich), he seems to find a way back to life in dealing with death.

Breathing is the directorial debut of actor Karl Markovics (Stockinger, The Counterfeiter), who also wrote the screenplay for his intense story. Extensive research and dramaturgical restraint ultimately resulted in the people in the film, their everyday professional lives and life in prison coming across as extremely authentic. Without many words, Markovics manages to say more than many a dialogue-heavy film manages. The very realistic, almost matter-of-factly cool handling of the subject of death makes access to the story somewhat difficult at the beginning, as one generally resists being confronted with this subject, which affects us all, in such an unembellished way.

But as soon as it becomes clear why Markovics has set his story in the environment of undertakers, the desire for life gives way to the fear of death. But even though the juvenile delinquent finds a second chance at a better life through direct confrontation with death, the film refrains from an overly positive outcome. In the end, the sun doesn't shine on Roman, he doesn't fall into the arms of his mother, who gave him away as a little boy, and he hasn't found the friends for life. Rather, there is only a small glimmer of hope at the end. But that is enough to let the viewer out of this film with a positive feeling, which can score with its symbolic imagery, decent humor and very good actors.

Surely, Breathe already seems, despite some very powerful images overall, more like a good TV production that you do not need to have seen in the cinema. But if you appreciate sophisticated German-language arthouse cinema and want to see a strong story told in a very individual way for once, you shouldn't miss this Austrian production. Worth seeing

Cinema trailer for the movie "Breathe (Österreich 2011)"
Loading the player ...