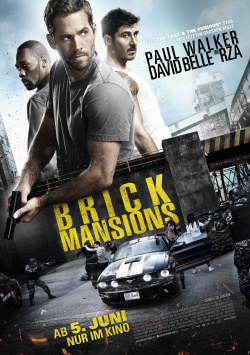 In the not-too-distant future, the Detroit neighborhood of Brick Mansions is sealed off from the rest of the city to keep murder, drug dealing, and other crimes under control. Violence and anarchy reign in the neighborhood, which is surrounded by a high wall, so no one in their right mind would willingly enter Brick Mansions. But undercover cop Collier (Paul Walker) has no choice, because ruthless drug lord Tremaine (RZA) has come into possession of a nuclear weapon that could wipe out all of Detroit. To get to Tremaine, however, Collier needs help. Ex-con Lino (David Belle), whose girlfriend Lola (Catalina Denis) is in the drug lord's grip, is tasked with assisting him in the suicidal mission. Too bad Lino has just been framed by crooked cops and is in no mood to help a cop. Collier has little time to get Lino to help him free his girlfriend and disarm the bomb. But the cop has no idea at the time that the real danger comes from a completely different source.

Brick Mansions is the last film that Paul Walker had completely shot before his accidental death. Even though Walker definitely had more talent than he was allowed to show in works like this one, it offers its fans a successful farewell at least on the action level. Overall, though, this US remake of Pierre Morel's French flick Ghettogangz - Hell Outside Paris is not a particularly good film. This is primarily due to the rather uninspired script by Luc Besson, who had already written the original. The dialogue is simply atrocious and the various plot elements a mere string of clichés. When David Belle, who reprises his role from Ghettogangz here, pulls off some truly spectacular parkour moves, the dramaturgical weaknesses are quickly forgotten. And also the chases on foot or by car, which he completes in duo with Paul Walker, make the film at least in places extremely worth seeing.

But as soon as there is a break from running, shooting or beating and the viewer gets the opportunity to think about the story, the entertainment value of the film plummets very quickly. And at the latest with the ending, which really makes it way too easy with its socially critical message, it becomes clear that any good intention and any promising idea has been completely squandered here. Surely, a movie like this one doesn't have any high intellectual ambitions, but just wants to entertain. And in some moments Brick Mansions manages to do that really well. But if a scenario is created that reveals such striking social criticism, it should have been elaborated with a bit more creativity, bite and depth to actually work and not end up being downright ridiculous.

In terms of acting, the whole thing is not exactly on an extremely high level. While Paul Walker really tried hard to play against the tired script, but still only got out a routine performance, Wu-Tang Clan co-founder RZA in particular just isn't talented enough acting-wise to make a really good villain. While David Belle's parkour interludes make you forget any acting weakness, Catalina Denis can't hide in any scene that she's only been cast as an attractive accessory.

If you don't care much for an elaborate story or high acting, you'll definitely be very entertained by Brick Mansions. But if you expect a little more from simple-minded action entertainment than cool fights and rousing car chases, you can safely save your admission money for this flick. Therefore. Only with cutbacks worth seeing!