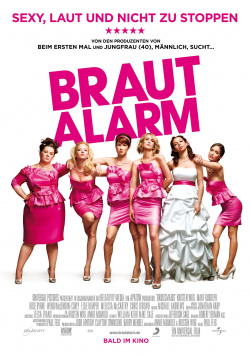 In recent years, Judd Apatow has put his own special stamp of humor on American cinema comedies as director or producer of films such as Virgin (40), Male Looking. or Superbad. The clearest trademark of an Apatow comedy is that it knows how to mix crude wordplay and disgusting humor with a lot of heart and charm into a whole worth seeing. Now Judd Apatow has reunited as producer with the man with whom he launched his career in American TV with the acclaimed but far too soon cancelled series Freaks & Geeks and Undeclared. Directed by Paul Feig, he made the comedy Bride Alarm, which went on to become a surprisingly long-lived surprise hit in the US.

In the center of the story is Annie (Kristen Wiig), in whose life at the moment so nothing wants to succeed: by her boyfriend she was left, her lover (great macho: Jon Hamm) uses her only for his sexual desires and her great passion, an own bakery, she has also lost. So when her best friend Lillian (Maya Rudolph) announces her engagement, Annie is only partially pleased. Still, she wants to do her best as maid of honor. Too bad that the rich Helen (Rose Byrne) wants to dispute her position as chief bridesmaid and tries with all means to become Lillian's best friend. A merciless duel begins, which drives Annie more and more to the edge of madness. She seems to completely overlook the fact that someone positive is finally entering her life in the form of the lovable police officer Officer Rhodes (Chris O'Dowd) in the catfight.

Bride Alarm is truly not a nice, colorful wedding comedy in the style of Bewitched or My Best Friend's Wedding. Feig and Apatow, along with lead actress and co-writer Kristen Wiig, push the pain threshold - and in some places, beyond it. And that's a good thing, because it's what makes this story about women on the verge of a nervous breakdown stand out from the crowd of US comedies of the slightly cruder kind. Readily described as a hangover for women, Bride Alarm dares to take paths that the usual wedding comedies tend to avoid.

Annie, for instance, is not really a sympathetic main character. She's trapped in depression, putting her foot in her mouth as a result, and especially hurts the people who really care about her. Especially her competition with Helen, who is portrayed in a wonderfully unsympathetic way by Rose Byrne, hurts Annie's friends, but also the audience. There's a scene, for instance, in which the two women engage in a kind of wedding speech duel, which Feig stretches out in a deliberately unpleasant way so that it really hurts. Some viewers may already be rolling their eyes in annoyance here. But upon closer inspection, it's these very uncomfortable moments that give Bride Alarm a certain realism. The dialogue, the humor, the dramaturgy, it all has an authenticity to it that is rare for US comedy of this type, despite a certain amount of exaggeration.

As great as Kirsten Wiig (Paul), ensemble member of US comedy show Saturday Night Live, is in the role of neurotic Annie, the secret star of the film is Melissa McCarthy, best known as Sookie St James from the TV series Gilmore Girls. As the man-hungry Megan, McCarthy is never too shy for a gag, no matter how crude, which she presents in a wonderfully shameless manner. Particularly amusing are the scenes she gets to play with her actual husband, who makes a small but extremely funny cameo appearance as the supposed Sky Marshall.

In the USA, the comedy, which was staged with relatively simple means, was able to bring in well over 150 million dollars. Whether this success can be repeated in Germany remains to be seen. Admittedly, the advertising is aimed at the Sex and the City audience, which is present in quite large numbers. However, Bride Alarm is somewhat coarser, less glamorous and not always more pleasantly honest than the popular TV series and its two theatrical spin-offs. But despite some lengths and even though some gags literally go down the drain, Brautalarm would be a success in German cinemas. Because, as already mentioned, this Apatow production again has its heart in the right place and is carried by a really good-humored ensemble. In addition, Jill Clayburgh, who died in November 2010, gives her farewell performance here. All reasons not to stay away from this somewhat exhausting but thoroughly funny wedding preparation. Worth seeing