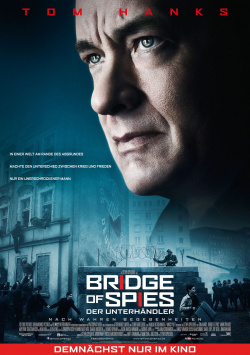 Bridge of Spies - The Negotiator

USA, in the 1950s: Insurance lawyer James Donovan (Tom Hanks) is considered a first-rate negotiator since his involvement during the Nuremberg trials. As a result, he is chosen to defend Rudolf Abel (Mark Rylance), a Soviet agent arrested by the FBI who has been living undetected in New York for years. Despite legitimate fears of putting his reputation on the line, Donovan puts his all into the case until the hatred he faces from the public spills over into his family. After the verdict, the case seems to be over. But then an American U-2 spy plane is shot down in Soviet airspace and pilot Francis Gary Powers (Austin Stowell) falls into Russian captivity. To prevent Powers from passing sensitive information to the Russians, a prisoner exchange is to be arranged: Abel for Powers. Donovan, of all people, is to travel to Berlin as an independent mediator to organize the exchange. But then a young American student is arrested in East Berlin, reshuffling the cards for Donovan.

Based on true events, Steven Spielberg has directed Bridge of Spies, a first-rate spy thriller in which he again displays his talent for great entertainment cinema with depth. With the support of a great script by Oscar winners Joel and Ethan Coen, Spielberg transforms a rather dry political subject matter into a clever cat-and-mouse game in which elegantly staged moments of suspense, big emotions and surprisingly light humour are coherently mixed into a rousing whole. Although there is actually no action in the classic sense and the action is largely determined by dialogue, there is never a second of boredom. Here Spielberg once again proves himself to be a master of his craft, who could probably also film the telephone book in an extremely exciting way.

In addition to the excellent script, the gripping staging and the atmospheric imagery of the filming locations in New York and Berlin, the first-class actors naturally also ensure that Bridge of Spies has become one of the best films of the year. Tom Hanks once again delivers an extremely charismatic and at the same time very multi-layered performance, which is able to carry the film confidently at every moment. Hanks harmonizes perfectly with his co-stars, but is constantly upstaged by the extremely understated, truly wonderful performance of Mark Rylance. As a result, the scenes between Donovan and Rudolf Abel are among the film's best moments, with their final encounter in particular playing the full emotional gamut. This is really great cinema.

Bridge of Spies offers everything that good cinema entertainment needs: suspense, humor, great actors and dialogue that you can hardly get tired of. In addition, the true background of the story is so interesting that you end up wanting to know more about James Donovan, his life and his work. One of Spielberg's best films in recent years and a must-see for anyone who appreciates sophisticated entertainment films. Absolutely worth seeing!!

Cinema trailer for the movie "Bridge of Spies - The Negotiator (USA 2015)"
Loading the player ...