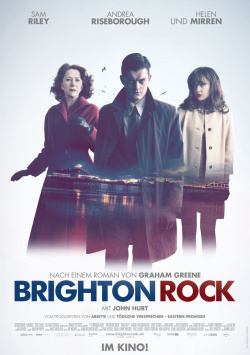 Back in 1947, Graham Greene's classic Brighton Rock, known in Germany as Am Abgrund des Lebens, was successfully filmed. Now Rowan Joffe has taken on the material again, moving the action to the sixties and thus creating a completely original version of the drama.

The film takes the audience to the picturesque seaside resort of Brighton. But the idyll is deceptive, for a bloody power struggle rages in the underworld. Especially the young criminal Pinkie (Sam Riley) wants to make a career by any means. To do so, he even takes on the powerful gangster boss Colleoni (Andy Serkis). One of his men dies in a duel with Pinkie, which increases the reputation of the young thug suddenly. Too bad he was photographed on the pier just before the murder and naive waitress Rose (Andrea Riseborough) could identify him. And so Pinkie has no choice: with rough charm he seduces the girl and draws her more and more into his dangerous spell. Every attempt by her boss Ida (Helen Mirren) to keep Rose out of the criminal scene fails, and soon a tangible disaster is brewing.

In itself, Brighton Rock has enough successful elements to be safe from being dismissed as a typical remake. The cast is compelling, led by newcomer Andrea Riseborough and Control star Sam Riley. And the work of cinematographer John Mathieson, who has translated films like Gladiator, Robin Hood and The Phantom of the Opera into engaging images, can only be described as superb. Despite these good guidelines and the novel on which the story is based, this version of Brighton Rock is only marginally convincing.

Because all the successful aspects are offset by a very unwieldy production that suffers from unsympathetic characters, wooden dialogues and sometimes quite theatrical acting by the protagonists. It's made extremely difficult for the viewer to get emotionally involved with the characters and thus develop an interest in their fate. And what good are the most beautiful pictures if the viewer doesn't care about the story? The dreary events need a more relaxed realization that allows the viewer to get involved in the story. Sure, it can now be argued that Joffe's screenplay sticks very closely to the literary original and that this could explain the somewhat unwieldy, artificial character of the production. But perhaps the film would have done more justice to its template if Joffe had taken a few more steps away from the book in order to turn the literary into something even more distinctly cinematic.

Good actors, engaging imagery, and an interesting story are, on balance, on the plus side for Brighton Rock. As a result, the thriller drama may find favor at least with arthouse audiences accustomed to somewhat bulkier works. But those who appreciate more straightforward mainstream fare - which doesn't necessarily have to be less sophisticated - will find themselves rather less entertained here