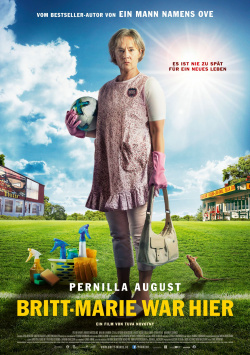 The life of Britt-Marie (Pernilla August) runs according to very clear rules - until her husband ends up in hospital with a heart attack. Too bad his younger lover is also at his bedside. Suddenly, what was everyday life for Britt-Marie for 40 years lies in ruins before her. At over 60 years old, she has to start all over again. But finding a job proves to be extremely difficult. There is only the management of a youth centre including the training of a youth football team in the small village of Borg. Although Britt-Marie has no idea about soccer and is not exactly a pro in dealing with children, she accepts the challenge, which not only turns her life upside down.

Britt-Marie was here, the second directorial effort by actress Tuva Novotny, is based on a novel by Fredrik Backman, who could already inspire with A Man Called Ove. And like the latter's film adaptation, Britt-Marie Was Here was a huge success in Sweden. However, despite a similarly quirky main character and some delightfully offbeat moments, this story can never match the class of Ove. The production is just too conventional for that and the story told too predictably. Many developments are served up early on as if with a sledgehammer, so that even the last viewer can really guess what will happen in a few minutes.

That's not to say that the film isn't entertaining. It just never gets past the status of being nice. Actually, only Pernilla August can leave a special impression. Her acting, which can be described as minimalistic especially at the beginning, gives the character of Britt-Marie a very special character, which - despite some very special quirks - you just have to like. When she meets the disarming honesty of children with her kind or the unusual kindness of certain people in Borg, it quickly provides the viewer with an amused grin.

Britt-Marie was here could have been quite a great comedy with a few unexpected moments perhaps. As it is, the whole thing is a small, harmless film that hurts no one, but is also forgotten quite quickly. For an entertaining afternoon at the cinema it is enough - and for that there is also a satisfied: Worth seeing!

Cinema trailer for the movie "Britt-Marie was here (Schweden 2019)"
Loading the player ...