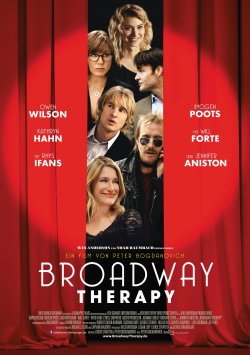 Izzy (Imogen Poots) would love to be an actress. But so far she waits in vain for the big break. Therefore, the beautiful Brooklyn girl must ensure their financial survival as Ecort lady. But when she is booked by the charming Broadway director Arnold (Owen Wilson), this chapter of her life could soon be a thing of the past. Because after a really pleasant night, he gives her $30,000 to use to make her dreams come true. No sooner said than done, Izzy quits her job as an escort girl and attends an audition for a Broadway play. Too bad the director is Arnold, of all people, whose wife Delta (Kathryn Hahn) will also play the lead. But that's not all: Joshua (Will Forte), the play's author, is immediately smitten with Izzy and very obviously courting her. Yet he is involved with Jane (Jennifer Aniston), who of all people is Izzy's psychotherapist. And that's just the beginning of the turbulent emotional chaos that will befall everyone involved over the next few days and turn many a life upside down...

In 1972, director Peter Bogdanovitch delivered one of the classics of screwball comedy with Is what, Doc? Even today, the comedy starring Barbra Streisand and Ryan O`Neal works quite wonderfully. Now, 43 years later, Bogdanovitch is trying his hand again at what should be an extinct genre. Broadway Therapy has all the right ingredients to work well: a turbulent story with countless twists and turns, a great, good-humored cast, and plenty of wonderfully over-the-top slapstick. In addition, the production is filled with a nostalgic charm that should go down well with viewers of the 40+ generation. And fans of Is What, Doc? may be pleased to know that two supporting actors are once again in the mix.

It's really fun then to watch the characters' muddled romantic and neurotic goings-on. Jennifer Aniston is wonderfully biting as a psychotherapist who needs therapy more than most of her patients, while Imogen Poots is simply charming enough to fall in love with. Will Forte (Nebraska) is perfect as a shy screenwriter and Rhys Ifans is a real joy as an actor (himself) in love. Owen Wilson doesn't really surprise, his performance reminds a lot of the one from Moonlight Mile - whereas that's really nothing negative.

Despite all these positive aspects, in the end the feeling remains that the film somehow seems a bit too tried. The timing is good in itself, but it just lacks that certain lightness that Is what, Doc? excelled at. The acting, the dialogues, the gags - all of it is fun, but somehow seems artificial and not as genuine as it was forty years ago. Because of that, especially towards the end, some scenes seem a bit overdone and annoying, which dulls the fun factor of the movie a bit. Especially those viewers who don't like old-school humor will be less than thrilled by such moments.

Besides that, Broadway Therapy is really nice, if harmless fun with a lot of engaging flair and wonderfully good-humored actors. While not every punchline is spot on and it gets a little too turbulent at times, it's almost impossible not to sit in the cinema with a permanent smile on your face here. A delightfully old-fashioned pleasure that lovers of classic screwball comedy should not miss. Worth seeing