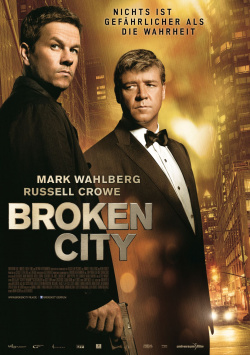 He was a cop with heart and soul. But his unbridled temper was Billy Taggart's (Mark Wahlberg) undoing. The fatal shooting of a suspect, which may have been self-defense but may have been murder, cost Billy his badge. But through the influence of Mayor Nicolas Hostetler (Russell Crowe), Billy still got off lightly and didn't go to jail. For that, he now owes the mayor a favor. Seven years later, Hostetler calls in that same favor. Billy, who now works as a private detective, is supposed to shadow Cathleen (Catherine Zeta-Jones), the mayor's wife, and find out if she is cheating on her husband. After only a few days, this fear seems to be confirmed and Billy can present his client with photos showing Cathleen together with Paul Andrews (Kyle Chandler), the campaign manager of Hostetler's opponent Jack Valliant (Barry Pepper). For Billy, that's the end of the job. But when Andrews is shot dead a short time later, the ex-cop realizes that he has been drawn into a dangerous web of corruption and violence by the mayor and that he must now put a stop to the shady politician himself, even if it means facing an old debt.

With Broken City, Allen Hughes delivers his first directorial effort without his brother Albert, with whom he had previously directed successful films such as Book of Eli. The script, by playwright Brian Tucker, turns out to be a fairly classic, straightforward thriller that doesn't have any very big surprises to offer. Hughs has conjured from the rather conventional story but still rousing and atmospheric suspense cinema, which can convince with atmospheric images of New York, a decent pace and good actors.

While Mark Wahlberg delivers again only his usual, mimic rather limited performance, which is absolutely appropriate for this role. Billy Taggart is not a particularly rational person, but an emotional hothead whose hot-temper always gets in the way not only professionally, but also in his personal life. For such a character, Wahlberg is really very well cast, even if his performance as a whole is very lacking in surprises. In contrast, Russel Crowe turns in an absolutely watchable and strong performance as a sleazy and shady politician with a spiffy head of hair and a feisty grin, which is only hindered by the script's somewhat clichéd characterization.

Although there's hardly any real action, the film is only tough and tedious in a few moments. Apart from the ultimately somewhat superfluous subplot involving Billy's girlfriend Natalie (Natalie Martinez), Allen Hughes sets a decent pace through which some dramaturgical weaknesses are very well concealed. Still, Broken City doesn't really manage to leave a lasting impression in the end. The thriller is good, atmospheric and exciting, but it's also very conventional and lacks any real surprises. If you are not looking for a new genre classic and are satisfied with well-acted, atmospherically staged and entertaining suspense cinema, you can safely dive into the sordid world of New York politics. Worth seeing