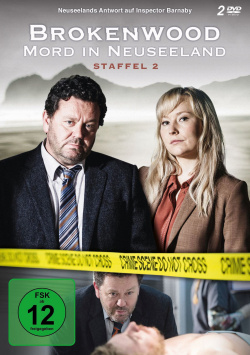 Content: In the not so contemplative provincial town of Brokenwood a lot of blood is flowing again. Detective Sergeant Mike Shepherd (Neill Rea) and his partner DC Kristin Sims (Fern Sutherland) have a lot to do. Luckily, after some initial difficulties, the two have become a well-rehearsed team. Whether it's the murder of a rugby coach who was suffocated with lace underwear, a death during a performance of "Hamlet", the discovery of a human hand in a cancer trap or the death of Shepherd's favourite singer - when the country fan and his quick-witted partner investigate in their very own way, the bad guys (and girls) have to dress warmly.

"Brokenwood - Murder in New Zealand" is even almost better in the second season than in the first episodes. This is not only due to the wonderfully bizarre murder cases, in which the makers once again proved a wonderfully macabre ingenuity. The investigator-duo also plays a big part in making the series work so well. In the new episodes, Sheperd and Sims are a well-rehearsed team, who perfectly pass the balls to each other, but who also clash in a humorous way again and again. The fights of words between the two are simply delicious and always make you smile with amusement. But also some very wacky side characters - for example the local theater group in the episode "Die or Don't Die" - keep the entertainment value of the series very high throughout.

With wonderful little allusions to the image of New Zealand as the home of the Hobbits ("I don't like hairy feet") and wonderful landscape shots "Brokenwood - Murder in New Zealand" also gets a very special touch. Surely, the mixture of thriller, humor and deceptive idyll reminds in the best sense of "Inspector Barnaby". Fans of the British investigator will then also feel in good hands with his New Zealand colleagues. But despite a certain resemblance, the stories from Brokenwood also have their very own character and special charm that is hard to resist.

"Brokenwood - Murder in New Zealand" proves that conventional crime fiction can be served up in a surprising, fresh and entertaining way with a few simple tricks and well-drawn characters. Bizarre, macabre, funny and exciting - light crime entertainment can't flicker off the screen any better. That's why there is a clear choice for these four episodes in feature length: Absolutely worth seeing!

Picture + sound: The series inspires with wonderfully atmospheric pictures, which on the DVD are shown to advantage thanks to a good overall sharpness and a harmonious colour scheme. All in all, the picture quality is on a good TV level. The Dolby Digital 2.0 mix is on the whole rather reserved, but the dialogues sound powerful, the music and soundscape are well tuned to it. Good!

Extras: As a bonus, Disc 2 offers a brief look behind the scenes with interviews of the main actors. But after nearly 3 minutes the fun is already over again. Unfortunately, this is a little bit meagre.

Conclusion: "Brokenwood - Murder in New Zealand" goes into the second, again very entertaining round! The wonderfully bizarre murder cases and the amusing word fights of the investigator duo make this New Zealand crime series an absolute must for all fans of series like "Inspector Barnaby". The double DVD presents the four episodes of the second season in good picture and sound quality. The bonus material turns out a bit thin, though. Nevertheless: Here you get almost six hours of best TV entertainment - and for that there is a clear: Absolutely recommendable!