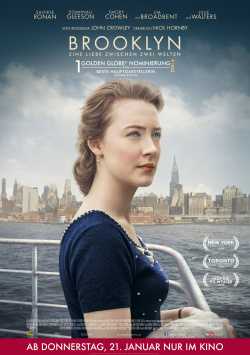 Brooklyn - A Love Between Two Worlds

New York in the 1950s: In order to make a better life for herself and her family, the young Irishwoman Eilis Lacey (Saoirse Ronan) decides with a heavy heart to emigrate to the USA alone. With the help of the Irish priest Father Flood (Jim Broadbent), she quickly finds a place to stay in a boarding house for young women and a job as a saleswoman in a large department store. But homesickness weighs heavily on Eilis' mind - until she meets Italian-born plumber Tony (Emory Cohen). In the charming young man, she finds the support she's been missing in her new life. Slowly, a romance unfolds between them that seems to become true love. But just as Tony reveals his plans for a future together, Eilis receives a message that forces her to travel immediately to her old home. But will she ever get back to Brooklyn and Tony after that?

For the screen adaptation of Colm T&oacute;ib&iacute;ns bestseller Brooklyn - A Love Between Two Worlds, author Nick Hornby could be won over. He delivered a wonderful screenplay that lightened the story's many heavy, dark moments with his own brand of dry humor. Hornby's script strikes the perfect balance between drama, emotion, and humor without falling too much into the usual cliché traps. Director John Crowley (Boy A, True Detective) then executed this script with a sensitive hand. The result is a really beautiful and stirring story about a young woman who has to decide not only between two men, but between two completely different life plans.

In principle, this is not exactly new. But the implementation of the familiar elements, as well as the acting of the very good actors, make the story overall very engaging and entertaining. The only problem is that the events are ticked off too quickly at some moments. While the film takes its time in allowing the love between Eilis and Tony to blossom, what takes place after Eilis` return to Ireland feels a bit rushed overall. True, it becomes clear that new opportunities are opening up for her here, both professionally and romantically, making it tempting for her to stay in her homeland and near her mother. But compared to the plot line in New York, the story here is ridden at a gallop. And as a result, as a viewer, you are much less emotionally involved here than you were at the beginning of the film.

So then the ending doesn't feel quite as powerful as you might have wished. Nevertheless, the dialogues, the actors and also the visually atmospheric production, accompanied by atmospheric music, can still pull out a lot here. So in the end, Brooklyn - A Love Between Two Worlds may not be a masterpiece, but despite minor flaws, it's a really nice love story about the courage to start over and about second chances. And for that there is a very clear: Worth seeing!

Cinema trailer for the movie "Brooklyn - A Love Between Two Worlds (Irland/Großbritannien/Kanada 2015)"
Loading the player ...