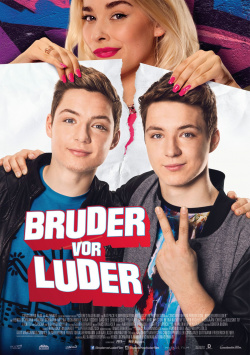 The sixteen-year-old twins Heiko and Roman (DieLochis) have made it: On YouTube, the two are real stars with millions of clicks and enthusiastic followers. Now they want to hit the ground running on the big live stage. The excitement before the first concert is great, so any distraction is undesirable. But now, of all times, the seemingly well-behaved Jessy (Milena Tscharntke) turns Heiko's head. What the brothers do not suspect: Jessy is a quiet-addicted bitch who only wants to use Heiko to become famous herself. She pretends to take care of her sister Bella (Tara Fischer), who is supposedly in a wheelchair since a car accident. And Heiko falls for this rotten game and neglects the preparations for the concert in return. So Roman has only one way out: he has to embarrass his brother in front of his new flame in such a way that she immediately drops him like a hot potato. But that's easier said than done.

With over 1.7 million subscribers, DieLochis are among the very big German YouTube stars. The twins from Riedstadt in Hesse have built up a wide fan base in recent years with comedy and music videos. With some of their songs, the brothers even made it into the German singles charts, which was even followed by their first live tour in early 2015. After this success, a feature film was naturally the next logical step. And as with all their projects, DieLochis were also heavily involved in the making of this one. Not only do they play the main roles, but they also helped direct the film. The result is the comedy Brother Before Slut, which is clearly aimed at the young fan base.

The second YouTube film of the year after Potato Salad is now truly not a film made for critics - and certainly not for viewers older than 16. To complain about the not exactly stunning acting talent of the popular twins is therefore not only pointless, but also not really appropriate. Because who goes to this movie wants to see DieLochis - and then it doesn't matter if they don't act very well. And also some other weaknesses will be forgiven. I remember all too well what cinematic embarrassments I enjoyed at that age. Still, for all its sympathy and consideration for its target audience, it simply cannot in good conscience be said that Brother Before Slut would be a good film.

Next to the completely unimaginative story and embarrassing gags from the pubescent moth-box, the film tugs at the nerves of the audience with foreign-shame performances of some established actors (Ludger Pistor or especially bad: Petra Nadolny), extremely clumsy sound effects or pointless guest appearances of other YouTubers. But it gets especially bad when Bella confesses why she's in on her sister's nasty game, and the story briefly tries to offer something like depth in the process.

Maybe some kids are so blinded by their love for Roman and Heiko that they really enjoy themselves here. And even if it hurts, they should be granted that. It may also be that DieLochis have real talent in some ways. But Brother Before Slut is not convincing proof of that, unfortunately. Who can laugh about diarrhea, erections in the swimming pool or about chicks, next to which even the students from Fack Ju Göhte look like future Nobel Prize winners, will be only slightly bothered by the many weaknesses of Bruder vor Luder. But if you expect at least really funny humor and don't want to bathe in infantile clichés for 90 minutes, you should give this work a wide berth. Only for very hard-boiled Lochis fans worth seeing!

Cinema trailer for the movie "Brother Before Slut (Deutschland 2015)"
Loading the player ...