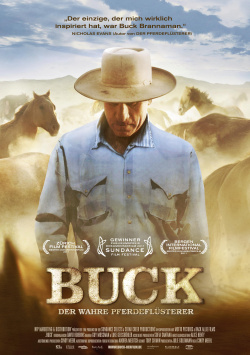 Dan Buck Brannaman was the model for the character of Tom Booker in Nicholas Evans` hit novel The Horse Whisperer, in the film adaptation of which he also served as a consultant and double. But Buck`s popularity in the USA goes far beyond his involvement in this film. For Buck Brannaman has a rare gift that has made him a regular folk hero to many Americans. Buck is a horse whisperer who, year after year, helps many people come to grips with the problems they have with their horses. In his so-called clinics, he approaches the animals with tremendous sensitivity and shows their owners in an equally empathetic way that it is usually not the horses, but the people who need to change their behavior. His approach to horses and people is inspiring and fascinating in equal measure, which prompted filmmaker Cindy Meehl to take a closer look at this very special person in a documentary. The result is Buck - Der wahre Pferdeflüsterer (Buck - The True Horse Whisperer), a moving, amusing and interesting film that can be recommended not only to horse lovers.

For two years Meehl accompanied the natural horseman, observed him at work with the horses and also realized what effect he has on other people. His sensitive way of dealing with the animals often results in their owners realizing what is going wrong in their lives. In one particularly dramatic case, shown in the last third of the documentary, it becomes clear what power lies in the calm manner of the horse whisperer. The fact that, despite a difficult childhood in which abuse at the hands of his father was commonplace, he has always retained a belief in the good and passes on his deep-seated sense of tolerance and trust to the horses and, through them, to their owners, makes Buck a very special person.

Watching him work with sometimes very difficult cases at his popular clinics, never losing his calm and humor, is as exciting as listening to him, his family, friends and companions tell their stories about the life and workings of Buck Brannaman. Buck thrives primarily on the fact that it portrays a most interesting and also admirable man. In a world dominated by cynicism and bad news, a man like Buck naturally stands out quite a bit. And one can't help thinking that the world could do with more people of this ilk.

Whether you like horses, the book or movie The Horse Whisperer, or just entertaining portraits of interesting people, you definitely shouldn't miss this wonderful feel-good documentary. Worth seeing!!!