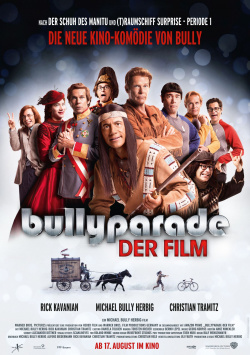 When the Bullyparade flickered across the screens for the first time in 1997, such comedy formats were still a real rarity on German television and Michael Herbig aka Bully was still an unknown face for most viewers. The success of the format did not come overnight, but at the latest after the overwhelming success of the cinema film Der Schuh des Manitu, the Bullyparade also became cult. Nevertheless, in 2002, after six seasons with about 90 episodes, it was over. And Bully himself did not believe that he would ever revive the format, let alone bring it to the cinema. He has now revised this opinion - fortunately for the viewer.

The first trailer for Bullyparade - The Movie was quite amusing, but also somehow gave the impression that this film comes fifteen years too late and that there is hardly anyone left who has really waited for it. But after just a few minutes it becomes clear that Bully and his cohorts Rick Kavanian and Christian Tramitz didn't just rehash old gags, but created entirely new episodes around Winnetou and Old Shatterhand, the (T)spaceship crew, Sissi and Franz, Lutz and Löffler or the Kasirske Brothers. And for the most part, they're pretty damn funny. The film skilfully transports the TV format to the big screen, shaking off all the dust in the process and coming across as refreshing and unspent. At the same time, fans are treated to all the things they loved about the Bullyparade. A successful mixture of old and new just.

About the content of the individual episodes should be revealed here as little as about the numerous guest stars, of which especially one is a real hoot. This much maybe: After a short but really great introduction with the Kasirske brothers there are three longer episodes (Winnetou, Sissi, (T)Raumschiff), as well as a shorter Lutz and Löffler episode. The whole thing is garnished with appearances of the three castanets. And also other popular characters like Dimitri or Pavel and Bronko appear briefly. Only on Bullys wallpaper fans have to do without - but that is quite bearable.

Bullyparade - The film is on paper a project that should not actually work - at least not so well. But Michael Herbig once again proves he has a knack for good gags, expertly balancing between parody and homage. When, for instance, Star Trek and Star Wars director J.J. Abrams is taken for a ride because of his penchant for lensflare effects, it's not only extremely funny. But it's also a fan's affectionate bow - and that lends a charm not only to this gag, but to the entire film that helps make less successful elements like the dance numbers quickly forgettable.

If you liked the Bullyparade, The Shoe of Manit and (T)Spaceship Surprise - Period 1, you're guaranteed to laugh tears here. After almost 90 minutes, which go by way too fast, there are some really funny outtakes and at the end of the credits there is a short clip from a movie, which luckily will never be released. And for this full pack of Bully there is a more than deserved: Absolutely worth seeing

Cinema trailer for the movie "Bullyparade - The Movie (Deutschland 2017)"
Loading the player ...