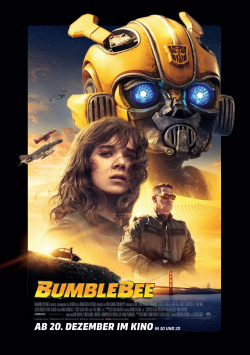 The war between Autobots and Decepticons on the planet Cybertron seems lost for the Autobots. Optimus Prime sends one of his Autobots to Earth. There he is to scout out if the planet is suitable as a hideout for the Autobots, where they can gather and prepare for a new battle against the Decepticons. However, the yellow machine creature is pursued by two Decepticons and nearly destroyed in a fight. As an old VW Beetle he can save himself in the last moment. From then on he hides in the junkyard of a small town in California. It is here that 18-year-old Charlie (Hailee Steinfeld) finds it, delighted to have found her first car of her own. When she realizes that the yellow Beetle is much more than just a car, it is the beginning of an unusual friendship between Charlie and Bumblebee - a friendship that brings unexpected dangers.

Latest after Transformers: The last Knight, I never thought I would be able to write the following sentence: there is a really good, entertaining entry in the Transformers franchise and it's called Bumblebee. It's a movie with solid action, a lot of humor, and a fair amount of heart. The reason this prequel is so successful can be found quickly: Michael Bay did not direct this! Sure, his influence as a producer is still noticeable. But Travis Knight, who took the helm here, very clearly put his own stamp on the whole thing and skillfully avoided many of the mistakes Bay made.

In doing so, he made one very general decision in particular that really served this film well: Less is more! The action scenes aren't cut quite as frantically anymore and aren't completely overloaded orgies of destruction like they were with Bay. The humor is no longer so penetratingly infantile. Peeing robots are thankfully looked for in vain here. And the human actors aren't overdrawn characters who always have to shout out their dialogue for some reason. Sure, the whole thing is still out-and-out nonsense. It's just a Transformers movie. But Travis Knight has turned it into extremely entertaining family entertainment that doesn't automatically cause all your brain cells to shut down for self-protection.

With plenty of 80s nostalgia, Bumblebee also pays tribute to numerous works of the era. Memories of E.T., for instance, come to mind more than once. Knight proves that it's still possible to stage great popcorn entertainment today, offering pace and action, but also allowing characters and something like a story to unfold. Yes, it's all very predictable and not particularly original. The story is extremely simplistic and can't really add much new to the franchise. And yet, such flaws quickly fade into the background in light of the high entertainment value and the extra dose of charm that the film constantly exudes.

Whoever loves the Transformers only for its action sequences might find this entry a bit boring. But if you generally like great blockbuster cinema with high show values, wit and heart, you can really warmly recommend Bumblebee. Absolutely worth seeing

Cinema trailer for the movie "Bumblebee (USA 2018)"
Loading the player ...