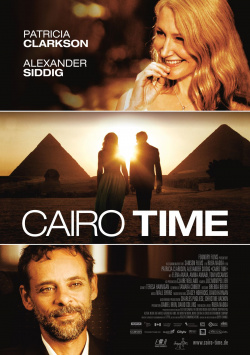 Fashion journalist Juliette (Patricia Clarkson) is looking forward to spending three weeks in Cairo with her husband who works for the UN. Visiting the pyramids together is her very big dream. But when she is met at the airport by Mark's Egyptian friend Tareq (Alexander Siddig) and learns that her husband is still delayed on a mission in Gaza, she has to spend the first time alone in Cairo. But she quickly realizes that even for a strong, confident woman like her, exploring the city streets alone is not easy. And so Tareq offers himself as a companion, eager to let Juliette experience the beauty and magic of Cairo. But with each day the two spend together, their friendship is also transformed by a certain magic.

Cairo Time is a very quiet, beautifully photographed drama that lays on the enchanting images of Cairo and the strong acting of the extremely versatile Patricia Clarkson and the charismatic Alexander Siddig. How a romantic bond slowly develops between their two characters is realized with a restrained believability, which lifts the film far above the level of ordinary cinema romances.

However, the fact that hardly anything actually happens and the long dialogue sequences proceed at a very sustained pace could also ensure that some viewers feel a certain boredom after only a short time, which persists until the more or less satisfying ending. In this case it's also hard to build up sympathy for the two main characters and to sympathize with their romance. Moreover, the suspicion might arise that Juliette's husband, who is absent due to a humanitarian aid mission, is portrayed in an overly negative way by director Ruba Nadda. Because somehow it seems as if he is blamed for what develops between Juliette and Tareq and that he doesn't deserve a woman like his at all, since he would rather take care of people in a crisis area than his spouse. And it is not exactly positive for the overall impression of the film when such a feeling is built up in the viewer.

But for those who can lose themselves in the enchanting visual language and the play of the two main characters, Cairo Time could be a wonderful cinematic experience for late summer. Therefore, for lovers of quiet romances immersed in images that could almost come from a travel documentary, and for all who appreciate good acting cinema, Cairo Time is absolutely worth watching. But for those for whom long conversations and slow walks don't sound like diverting entertainment, this short trip to Cairo can be safely advised against.