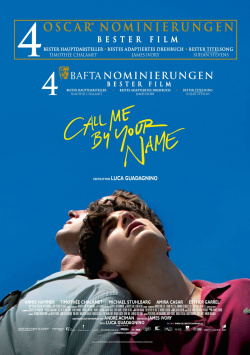 Call me by your name

1983: 17-year-old Elio Perlman (Timothée Chalamet) enjoys the summer in northern Italy at his parents' villa. Reading, listening to music or flirting with girls determine the relaxed everyday life here. But then the American doctoral student Oliver (Armie Hammer) comes to visit, who wants to do an internship with Elio's father (Michael Stuhlbarg). At first, the boy gets a little angry about Oliver's somewhat rugged nature, but the longer the young American is a guest with the family, the more Elio feels attracted to him. In him grows a desire that does not go unrequited by Oliver. A very special bond is formed between the two, which will make this summer unforgettable for Elio…

Based on the novel "Call me by your name" by André Aciman director Luca Guadagnino has staged a wonderfully unagitated, atmospheric and moving story about first love and a summer full of seduction and desire. The sex of the two lovers actually only plays a marginal role. Because "Call me by your name" is not a film about homosexuality, but about love and the end of innocence. The fact that the plot takes place in the early 1980s is perfectly chosen. Before the ubiquity of the Internet and smartphones, young people in particular experienced the summer months in a completely different way.

Guadagnino captures the mood of this time perfectly. Not only by the music, the clothes of the performers or the wonderfully nasty dance style of Armie Hammer, but also by the soundscape on a warm summer evening or the colouring on a hot afternoon. What develops here in the wonderful landscape of northern Italy between Elio and Oliver really looks real. As a viewer you can absolutely understand why the teenager feels attracted to the older man. Because the moments of passion between the two seem so unaffected, the ending can work out really well. This is a small trick precisely because the last act actually swings the moral lobe too obtrusively.

What this refers to first and foremost, I cannot say at this point without revealing too much about the end of the story. But anyone who sees the film will know what I mean when I say that there is a very special aspect of the story that goes all too smoothly across the stage. This can be annoying, but in principle it only serves to avoid watering down the emotional power of the end by another conflict. "Call me by your name" may be a little too long, but that doesn't attract much attention. The film is simply beautiful, well played - especially by Timothée Chalamet - and also visually really enchanting.

After the great success not only with critics Luca Guadagnino plans to tell the story of Elio in a sequel. Whether this is really necessary, remains to be seen, because the way it is, the end of "Call me by your name" is actually perfect. Whoever wants to experience the feeling of a passionate summer for a little more than two hours and wants to feel once again what it means when a young person's feelings really go crazy for the first time should not miss this special film. Absolutely worth seeing!

Cinema trailer for the movie "Call me by your name (Italien/Frankreich/USA 2017)"
Loading the player ...