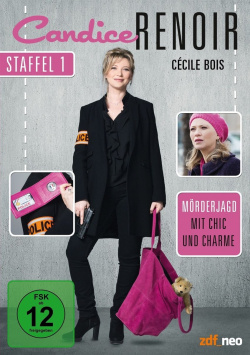 Content: For ten years, Candice Renoir (C&eacute;cile Bois) had not worked as a police officer. She had hung up her job to support her husband and go abroad with him. To thank him, he cheated on her and dumped her. Now Candice is trying to get back into her old job as a single mother of four not exactly low-maintenance kids. But that's easier said than done. Because a lot has changed in ten years. And Candice is not exactly welcomed with open arms by her new colleagues. Especially Capitaine Antoine Dumas (Rapha&euml;l Lenglet) can not take the blonde detective with her slightly naive appearance and her Barbie outfit seriously and lets her feel it clearly. But it doesn't take long before Candice's very special intuition and her ability to think outside the box prove her colleagues wrong. Behind the well-behaved façade is a tough, ingenious investigator who not only solves many a tricky case, but also manages her family and her turbulent emotional world.

Candice Renoir is an extremely entertaining crime series that has already completed three very successful seasons in France. Season four is already in the starting blocks. In Germany, the first two seasons have now been released, which quickly make it clear why the series is so successful and popular. The cases themselves, which Renoir and her team investigate, are probably only partly to blame. Because they offer good, but also quite conventional entertainment. Especially crime thriller fans are unlikely to experience any big surprises here. But it always depends on how you are presented with the familiar. And here the creators have come up trumps with several aspects that ultimately lift Candice Renoir out of the series monotony.

There is, of course, first of all the strong main character. Of course, there are other series that feature a single mother working as a police officer. Debra Messing as Detective Laura Diamond is probably the most recent example. But the well-written scripts and especially the pleasantly layered acting of C&eacute;cile Bois make Candice Renoir a really interesting character. Her investigative methods are often a bit headstrong and reveal a strength that you as a viewer - like her colleagues - don't really believe her to have at the beginning. Candice Renoir is the perfect example of why you shouldn't judge a book by its cover.

The coherent interplay between the crime story and a look at Renoir's turbulent personal life also ensures that the entertainment value always remains at a very high level. Even if the wheel is not reinvented here, so the series is simply fun and has an enormous addiction factor, which is difficult to escape. If you like exciting, but sometimes also amusing crime fare in a picturesque setting, you should not miss this charming and extremely cunning investigator. Absolutely worth seeing!

Picture + Sound: The image of the DVD presents itself in very warm colors and shows a good to very good overall sharpness. There are minor weaknesses in detail here and there, especially in darker moments. However, the beautiful shots of the small coastal town of S&egrave;te make up for some minor weaknesses. The Dolby Digital 2.0 mix makes the dialogue sound very powerful from the front. However, some minor sound effects and ambient noises also add some movement to the surrounds, which are at least filled with life from time to time. Good!

Extras: Unfortunately, there is no bonus material.

Conclusion: Candice Renoir is a very entertaining crime series with a strong lead actress. The cases Renoir and her team investigate offer conventional genre fare, but they are smartly and engagingly executed. In addition, the double burden as a policewoman and single mother and the no less chaotic emotional life of Candice Renoir ensure that the entertainment value even in the episodes in which the resolution of the investigation is quite predictable, always remains at a high level. On the DVD, the murderous goings-on in the southern French coastal town of S&egrave;te is presented in good picture and sound quality. Unfortunately, there is no bonus material. Nevertheless, for all lovers of entertaining crime fare and strong female investigators: Absolutely recommendable!