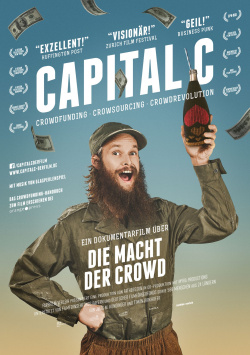 In the field of cinema it can be observed particularly well: especially the big studios are currently playing it safe. Instead of giving new ideas or niche productions a chance, they focus on sequels, reboots, remakes or spin-offs. While these aren't necessarily bad, they do ensure that a certain lack of courage and originality becomes noticeable. This is where crowdfunding comes in. Filmmakers who want to take their ideas outside the mainstream or directors who want to bring their TV series to the big screen turn directly to fans who, if the need exists, can then help fund these projects. This idea can then of course be transferred to many other areas, from videogames to the design of playing cards, music or funny design ideas that big companies simply don't believe in but which definitely go down well with the end customer. The fact that the customer/fan/viewer/player is directly involved in the creation of a product makes such crowdfunding projects very special.

The documentary Capital C is now dedicated to this topic by letting some experts have their say in general and taking a closer look at three very different crowdfunding projects. There's Zach Crain, who became a hit on the internet with Freaker USA, knitted covers for drinking bottles, and even received an invitation to the US version of the TV show The Lion's Den. But overwhelming competition and a break-in at Freaker headquarters could quickly put an end to that project. Another Kickstarter is Brian Fargo, who enjoyed great success in the 1980s with the video game Wasteland and now wants to crowdfund the sequel that fans have long longed for. Will there be enough demand to get the funding off the ground? And finally, the documentary also focuses on Jackson Robinson, who wants to make it big with hand-drawn poker cards. But does a market even exist for that?

Timon Birkhofer and Jørg M. Kundinger have started a crowdfunding campaign themselves to get this extremely entertaining documentary off the ground. In making it happen, they did almost everything right. Their film is informative and entertaining, wonderfully showing the possibilities of crowdfunding without hiding the downsides that definitely exist. With excellent timing, a touch of humour and a well-chosen soundtrack, they send the viewer on a rousing journey from the start to the (provisional) end of three exciting projects that impressively show what can be achieved with ingenuity, creativity and a lot of hard work.

Capital C is a must-see for anyone who wants to get involved with crowdfunding. The film gives valuable tips from experts, but also shows practical examples of how difficult the realization of such a project can be and what pressure can arise from the responsibility you have to your investors. That this is then also conveyed in such an entertaining way makes this conclusion unavoidable: Absolutely worth seeing!