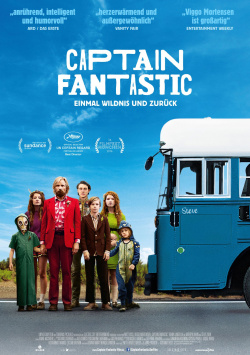 Captain Fantastic - Once in the Wilderness and Back

Smartphones, YouTube, fast food, computer games, shopping - none of that exists for the six children of Ben (Viggo Mortensen). For they live with their father secluded in the wilderness in the Northwest of America. Here Ben teaches his children all the necessary knowledge about history, politics and literature, but also about survival in the wilderness. When his wife dies, Ben is forced to leave his self-created idyll with his children and travel across the USA in his old bus so that his children can say goodbye to their mother at the funeral. But when they arrive at the grieving grandparents' home after a tumultuous trip, Ben is faced with a complete rejection of all his ideals. And suddenly he must struggle to do more than grant his wife her final wish.

Captain Fantastic is a tragicomic road movie that finally tells a refreshingly different family story. With a lot of heart and humor, director Matt Ross gives his viewers a glimpse into a very unusual way of life, where the family has turned their backs on civilization and created their own little paradise. Ross doesn't idealize this in a smooth Hollywood manner, but presents it with all its advantages and disadvantages. The patriarch Ben, superbly portrayed by Viggo Mortensen, doesn't necessarily seem like a real sympathetic figure. Especially his behaviour towards his eldest son (George MacKay) will definitely not be seen as particularly nice by most viewers. But with the time the story helps to understand Ben and the difficult relationship between him and his son better.

Naturally, the development that especially Ben goes through here is not completely free of clichés. And the resolution of the story does feel a little too smooth and harmonious to match the otherwise pleasantly biting tone of the film. But even though there may be small flaws like these, the production overall scores with a very interesting character sketch and a profound story that is told with a very positive lightness despite some heavy themes and dark moments. Matt Ross manages the unfortunately rare feat of presenting entertaining cinema that offers plenty of food for thought and philosophy.

To really appreciate the different facets of the story, the good acting of the actors, the beautiful images and the successful production, however, there should be a soft spot for American independent cinema. Especially the first act of the movie is a bit too unwieldy for viewers who love fast-paced mainstream cinema. You have to be willing to get into the flow of the story. Otherwise, Captain Fantastic quickly seems a bit tough or even boring. But if you manage to get into the film, you'll get a really beautiful and moving drama here, which shows that laughter can bring such incredibly important rays of sunshine into your life, even in the darkest hours. But it also shows how important it can be to step away from your strong beliefs and be open to compromise in order to truly live happily ever after. And for this, despite some small point deductions, there is then, on balance, a clear: Absolutely worth seeing!

Cinema trailer for the movie "Captain Fantastic - Once in the Wilderness and Back (USA 2016)"
Loading the player ...