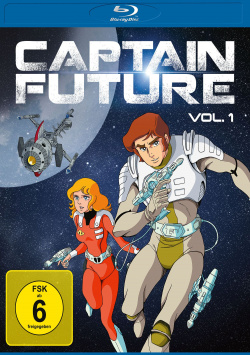 Movie: I can still remember very well the first time I watched Captain Future one afternoon in 1980. Even the brilliant theme music by Christian Bruhn made me realize that I was going to like the series. But when people turned into apes, the evil ruler of Megara appeared and the Comet took off from its base on the moon for the first time, I was hooked. After that, I just went to bed in my Captain Future pajamas, played with my model of the Comet, read the (admittedly not very high quality) comics and collected the Panini stickers. The Captain and his crew had a huge impact on my childhood - and I'm not alone. To this day, the series enjoys enormous popularity and many fans have been waiting for a re-release after the first DVD release was discontinued long ago and sold for horrendous prices on the internet.

This one is finally up for grabs, both on DVD and Blu-ray. Fans are spoilt for choice here: they can complete their Captain Future collection bit by bit, starting with the first twelve episodes on Vol. 1 first. But there is also a complete box set with the series special already known from the first release. And finally, there is the limited Collector`s Edition, which offers exactly what many fans have long been waiting for: All episodes in the original uncut version. However, these are not dubbed and since the cult music of the German version is of course missing here, these original Japanese episodes are really only something for hardcore fans.

I myself was very curious to see if Captain Future still worked for me 37 years after I became addicted to the series. Admittedly, with a bit of distance, the animations are at times rather dated, the dialogue almost unintentionally comical, and the logic holes created in the German version by the severe cuts are much more noticeable than to the untrained child's eye. And yet, even after all these years, the adventures of Curtis Newton aka Captain Future, the robot Grag, the android Otto, the agent Joan Landor, Captain Future's loyal friend Ezella Garnie and his mentor Professor Simon, the living brain, still exert a certain fascination and thus underpin the cult status of the series.

This may be because Captain Future is still quite an adult anime series, despite some very childish elements. But the soundtrack also makes the series timelessly good. Especially when compared to the Japanese theme music, which you also get to hear on this disc (the original opening credits can be seen at the end of each episode), you notice how much Christian Bruhn's music contributes to the success of the series. But also the villains (Wrecker and the ruler of Megara were especially cool to me as a kid), the flights with the Comet and the strange worlds the creators came up with are a lot of fun even after almost 40 years. Whether the series will find new fans nowadays is rather questionable. But all fans of yesteryear and unrestrained nostalgics simply can't get past this new release. Absolutely recommendable!

Picture + Sound: The series has now almost 39 years on the hump. Of course, you can tell that from the digitally remastered Blu-ray version. The picture is a bit choppy here and there and features some noticeable blurring. Coloring is good, but is nowhere near as powerful as recent animated films or series. Sound is okay and Christian Bruhn's iconic soundtrack in particular sounds pleasantly powerful from the speakers. Overall, for a series of this age, there is a satisfied: good!

Extras: Bonus material has the Vol. 1 Blu-ray unfortunately not to offer. The Complete Box, on the other hand, still holds a series special (OmU), which was also on the DVD initial release. And the Collectors Edition also has all the episodes in the uncut version (also OmU) to offer. If you want to finally see Captain Future in full length, you can't go past the expensive Collectors Edition.

Conclusion: Finally Captain Future is available again for home cinema. The cult anime series from the late 1970s still has a loyal fan base today, who can now choose between a box set with the first 12 episodes, a complete box set with all 40 episodes, or a limited Collectors Edition that has all the episodes as well as the original uncut Japanese episodes to offer. Admittedly, the ravages of time have taken their toll on the series. But its cult potential, charm and entertainment value remain unbroken even after almost four decades. Absolutely recommended for fans who didn't pick up the DVD first release at the time!