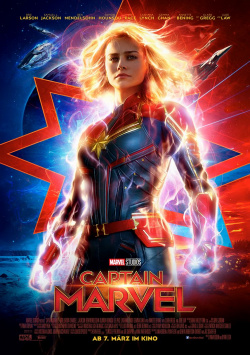 Vers (Brie Larson) is one of the best fighters in Starforce, a Kree intergalactic military task force. But in her dreams, she keeps seeing flashes of memories of another life. She wants to find out who she really is, while her mentor Yon-Rogg (Jude Law) wants to clear her mind of those memories so Vers can focus fully on her powers. But then she ends up on Earth on a mission against the Skrulls, menacing shape-shifters, and seems to have found the place she originally came from. Together with SHIELD agent Nick Fury (Samuel L. Jackson), she sets out to stop the Skrull invasion and uncover her own secret - only to uncover a much more formidable conspiracy.

It's about time: of course, there have been some very strong women in the Marvel movies, but it's not until the 21st entry in the Marvel Cinematic Universe that a female superhero takes center stage. And what a female she is! Before - as would be common knowledge - Carol Danvers aka Captain Marvel takes on Thanos in Avengers: Endgame, she is first introduced to audiences in her own film. This one starts off a bit confused, as it's first meant to convey what state of confusion Carol or Verse is in, before she later realizes who she actually is and where she's from.

So the audience is catapulted right into the middle of the action, which is repeatedly interrupted by snippets of memories. Only gradually is this character, important to the Marvel universe, properly introduced, which admittedly makes it a bit difficult to get started. But after about twenty minutes, the whole thing has picked up enough steam that you can sit back, relax, and be extremely entertained. Sure, the film doesn't have the meaningful grandeur of the recent Avengers films. But the coherent mix of action, humor, and delightful '90s nostalgia make the big-screen debut of the superheroine who made her comic book debut in the late 1960s an absolute success.

This is also thanks to Brie Larson, who plays Carol Danvers with a charming twinkle in her eye, adding a certain lightness to the film. In the more dramatic moments, however, the Oscar winner can also score, which is precisely why this superheroine is not only pleasing to the eye, but also really interesting as a character. The scenes between Carol and Nick Fury work really well. Samuel L. Jackson was rejuvenated with the help of computer technology, which looks almost perfect. Only in a couple of scenes is it noticeable that modern animation technology was used here. But the secret star of the film is Ben Mendelsohn as the Skrull warrior Talos. But more should not be revealed at this point.

Captain Marvel is once again a relaxed, but quite spectacular breath before Avengers: Endgame, after which the cards are completely reshuffled. What role Brie Larson as Carol Danvers will play in this is still open at the moment (although there is still enough material for a sequel, especially in terms of a story element). Even if the film has a few small weaknesses, it's a lot of fun, entertaining and almost perfectly realized in terms of animation. There one hopes nevertheless that one will get to see Captain Marvel also after the showdown against Thanos still more often in the cinema. Absolutely worth seeing!