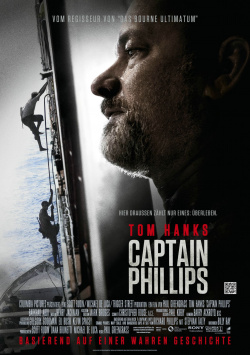 When the American container ship Maersk Alabama was attacked by a group of Somali pirates in 2009 and their captain Richard Phillips was taken hostage, it was naturally a very big event in the worldwide media. When Phillips was then freed by NavySEALs, the hero story was perfect. However, the hardship that drove the Somali pirates to their actions and the horror that Phillips and his crew members had to endure quickly faded into the background of media interest. Now director Paul Greengrass tries in his tried and tested sober, almost documentary way to trace the events beyond patriotic hero worship and also to trace the motives of the Somalis, admittedly without morally excusing them. He then succeeds very well almost up to the finale, ensuring that Captain Phillips has become an extremely intense, extremely involving thriller.

Played by Tom Hanks, Phillips delivers here one of the best performances of his career, which is already riddled with high points. He doesn't play the captain as a heroic superhuman whose fear or helplessness wouldn't show. Rather, Hanks embodies a deeply human character trying to maintain control over an inherently uncontrollable situation so that no one on his crew comes to harm. Opposing him is Muse (Barkhad Abdi), a young Somali desperate to prove himself a strong, superior man for whom giving up without paying a ransom is out of the question. A gruelling psychological duel develops between the two completely different men, which can really only end in disaster - for whichever side.

Captain Phillips is one of those films where it doesn't matter at all that the story is already known and its end is clear from the start. That's because the intense acting of the cast and Greengrass's style of directing integrate the viewer into the action in such a way that the film becomes an enormously gripping, nerve-wracking experience. Admittedly, the shaky-cam style that Greengrass loves to celebrate has been somewhat overused in recent years. Sometimes you get the sense that many a filmmaker believes that having the camera constantly moving makes their film seem more sophisticated - which is clearly not the case. But with Greengrass, things are a little different. The British filmmaker is an absolute perfectionist, where every camera movement, every seemingly inconsequential element, every movement of his performance has meaning. For him, the camera is more than just a window through which the viewer can look in and follow the story. Rather, for him it is a door that he slams open with all his might, drawing the viewer right into the film.

He has already shown the intense impact this can have with Flight 93. Captain Phillips is a consistent continuation of this stylistic device. Greengrass manages to have the audience thrown out of the safety of the cinema seat and feel as if they are on the hijacked ship with Richard Phillips. And on this starting point, the director is able to build an incredibly dense suspense structure that is beyond any foreknowledge of the story's outcome.

The fact that he doesn't just relegate the pirates to one-dimensional villains in the process, but tries to make it clear to the audience what drives a person to commit such a desperate act, is to Greengrass and his screenwriter Billy Ray's credit. However, even the director, who strives for a balanced picture, can't prevent the film's finale from feeling a bit like a hymn to the American military - although you shouldn't really think anything of it when you defeat a couple of Somali pirates in a mini-rescue boat with three large destroyers and a trained NavySEALS team. But even if the ending isn't one of the film's strongest moments, overall Captain Phillips has become a great, incredibly suspenseful film that not only challenges the viewer's nerves, but also makes them think. Entertainment cinema with a lot of depth that allows only one judgment: absolutely worth seeing!